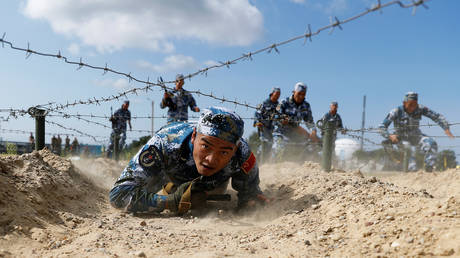 The Chinese Taiwan Affairs Office has defended Beijing’s military exercises near Taiwan, claiming it is a “just” move to protect peace and stability, and blamed Taipei’s “collusion” with foreign forces.

Speaking on Wednesday, Ma Xiaoguang, spokesman for China’s Taiwan Affairs Office, put the blame for rising tensions firmly on Taipei, accusing it of inventing “bogus accusations” against Beijing and colluding with foreign powers.

“The [Democratic Progressive Party] DPP authorities’ hyping of the so-called ‘military threat’ of the mainland is to completely invert right and wrong, and a bogus accusation,” Ma told gathered reporters.

Ma said recent Chinese drills were a response to Taiwanese “collusion” with foreign powers, a reference to the US and its allies, and the ruling DPP’s “provocations” concerning the island’s independence.

“They are absolutely just actions,” Ma claimed, referencing Chinese wargames in the province directly across the sea from Taiwan.

“If the DPP authorities obstinately persist in going about things the wrong way, and do not know how to draw back from the edge, it will only push Taiwan into a more dangerous situation,” the spokesman added.

On Monday, Chinese forces carried out beach landing and assault drills in the southern part of Fujian province, just across the sea from Taiwan. The action involved “shock” troops, sappers and boat specialists, according to the official People’s Liberation Army Daily newspaper.