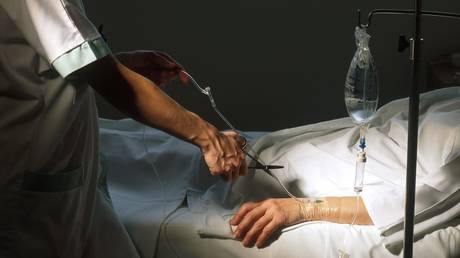 Anyone wishing to be euthanized now has to first present proof of vaccination or recovery from Covid, as per the new guidelines issued by Germany’s euthanasia association.

Germans will be ‘vaccinated, cured or dead’ by winter’s end – minister

A statement put out by the Hamburg-based group on Friday reads “assisted suicide and the preliminary examination of a patient’s ability to make decisions freely implies physical closeness between people. However, that is precisely the precondition for the spread of Covid.”

In February 2020, Germany’s top court overturned a ban on providing euthanasia as unconstitutional.

A number of German regions have put in place strict curbs, banning the unvaccinated from most public places. Across the country only recovered or inoculated people can enter restaurants, museums and similar venues, while those even with a negative Covid test cannot. Amid the surge in cases, the German states of Saxony and Bavaria have both cancelled all Christmas markets.

German Chancellor Angela Merkel told her fellow party members on Monday that the current wave of Covid in Germany was worse than any previous one and called for stricter measures to contain it. The country’s health minister, Jens Spahn, went even further, claiming that “by the end of this winter everyone in Germany will either be vaccinated, recovered or dead.”

Those statements came as the seven-day infection rate per 100,000 people broke a new grim record on Wednesday, reaching the 404.5 mark, as reported by Germany’s disease control and prevention authority, the Robert Koch Institute.