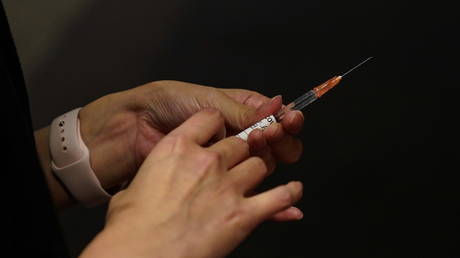 Australia’s Northern Territory has announced a Covid-19 vaccine mandate for those working in public-facing jobs, including hairdressers and shop workers, requiring they get jabbed or risk fines and being barred from the workplace.

The territory’s chief minister, Michael Gunner, said on Wednesday that “anyone serving the public at work will have to be vaccinated,” including beauty therapists, hospitality, retail and supermarket workers.

Those employed in “essential infrastructure, food or essential goods security or supply, or logistics in the Northern Territory” also fall under the vaccine mandate, with strict deadlines set for compliance.

All affected workers are required to have had their first jab by November 12, and their second by December 24. If they fail to adhere to the deadlines, they could be slapped with a fine of $5,000 AUD ($3,700 USD) and will not be permitted to attend their place of work.

More than 100 protesters arrested as police in Melbourne, Australia crack down on vaccine mandate demonstrators

Spanning an area roughly the size of Spain, Italy and France combined, the region has fully vaccinated 65% of its population. Gunner, however, said “an even spread” of vaccination was needed throughout the territory, referring to the lower inoculation uptake among Aboriginal and other remote communities.

The Northern Territory, home to major city Darwin, has weathered the pandemic remarkably well, registering just over 200 cases. The area’s chief, however, admitted this may not last: “One day, perhaps one day soon, it will be here and it will stay here.”

Other regions of Australia have imposed vaccine mandates on certain sectors. The premier of Victoria, Daniel Andrews, declared at the start of October that all residents in the southerly state working in occupations such as retail, law, media and professional sports must come forward and be double-jabbed by November 26. People employed in healthcare, education and construction already had the vaccine mandate thrust upon them.

The announcement of the jab requirement for construction workers spurred mass protests that turned violent in the regional capital of Melbourne in September.