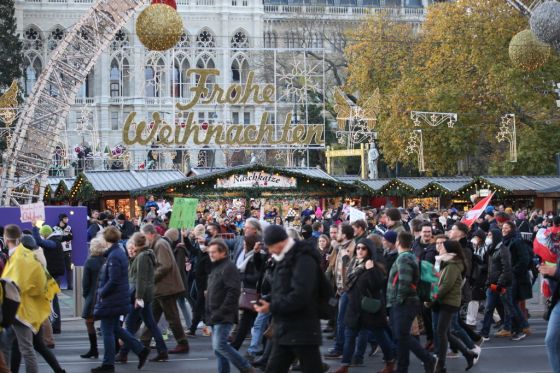 Grappling with Europe’s punishing fourth wave of COVID-19, Austria’s government took bold steps to combat the spread of the disease on Friday — not merely sending the country back into lockdown for three weeks, but also announcing the first national COVID-19 vaccine mandate in the western world.

Chancellor Alexander Schallenberg says the mandate, due to enter into force on Feb. 1, is needed to boost a stagnant vaccination campaign. Just over 69% of eligible people have received at least one dose, languishing about ten percentage points behind other wealthy western European countries. Authorities blame that comparatively low vaccine coverage for the record-breaking COVID-19 caseload Austria is currently experiencing, with 14,000 cases reported Monday —nearly twice as many as it experienced at the peak of its then-record second wave in November 2020.
[time-brightcove not-tgx=”true”]

“There are too many among us who haven’t shown solidarity,” Schallenberg told local media Friday. “Raising the vaccination rate is the only way to break this vicious circle.”

But the plan drew instant outrage. Some 40,000 people protested the governments’ new measures in Vienna on Saturday, joining a spate of marches across western European cities against recently reimposed COVID containment measures. Austrian demonstrators carried signs reading “no to vaccines” and “down with the fascist dictatorship.” Many levelled comparisons to the history of Nazi experiments in Austria—long evoked by the country’s powerful anti-vaccine movement. Police said far right affiliated groups, which have played a key role in spreading anti-vaccine information, were prominent at the marches.

Against that backdrop, public health experts are dubious about the decision to make vaccines obligatory. Though a mandate may convince some Austrians who were hesitant to get vaccinated, they say it is unlikely to win over those with more deep-rooted opposition. Some worry that the move could backfire, further politicizing the issue.

“It deepens the chasm in our society,” says Thomas Czypionka, head of health economics and policy at the Vienna-based Institute for Advanced Studies, “There is a growing number of people opposing the government and policies against COVID-19, and this vaccine mandate may well serve as a strong push to more radicalization— especially with our history.”

How will Austria’s vaccine mandate work — and will it be effective?

Under the government’s plan, authorities will send out invitations to vaccination appointments to the 2 million people who are not yet fully vaccinated, and after Feb. 1, will begin imposing fines of around $4,000 on those who refuse to attend. In the meantime, when the current lockdown lifts on Dec. 13, restrictions will stay in place for unvaccinated people.

Experts are divided on whether the mandate will work. Daily figures on vaccine doses suggest that stricter controls on the movement of the unvaccinated introduced earlier this month, combined with the surge in new infections, have pushed hundreds of thousands of people to a shot in the last few weeks.

With those recent moves apparently already convincing those who were on the fence, there is doubt about how much impact obligatory vaccines will have. “There will be a small group which will move on to vaccinations now, voluntarily. But most [unvaccinated people] will probably even go into more resistance,” says Eva Maria Adamer-König, head of Public Health at FH Joanneum University of Applied Sciences in Graz, Austria. She cites a 2016 study in the European Journal of Public Health that found mandates for selected vaccinations can make people more likely to refuse other vaccinations that they had previously been comfortable with. “This could be a big problem.”

Czypionka expects that those who are strongly opposed to vaccines will likely just keep making appointments for shots, not turning up, and refusing to pay their fines—potentially creating a headache for Austria’s courts. Since the mandate won’t come into force for several months and immunity from vaccines takes weeks to come into effect, it will have no impact on Austria’s current caseload, he says. “The right decision would have been to address skepticism early in the year, and to have implemented mandatory vaccination for the health professionals and for our educational staff. Maybe this would have been enough to avoid these strict measures.”

Why is COVID-19 so bad in Europe right now?

As winter sets in and Europeans begin to spend more time socializing indoors, the highly transmissible Delta variant of COVID-19, now dominant across the continent and the world, is spreading fast. Europe has for several weeks been the epicenter of the pandemic.

Vaccines are helping to bring down hospitalisations and deaths from COVID-19, though. In Austria, the current surge in infections is causing roughly a third of the number of daily deaths as the second wave, according to Oxford University’s Our World in Data project.

But the stagnation of Austria’s vaccine campaigns over the summer has left its population especially vulnerable, Adamer-König says. Many of the country’s fully vaccinated people received their last dose back in summer and, with protection from infection—though not from severe disease or death—waning after six months, people are becoming more able to catch and transmit COVID-19. “But [vaccinated] people still feel safe and like they can’t do any damage, and [unvaccinated] people haven’t gotten vaccinated because we have had few restrictions over the summer,” she says.

Adamer-König says the government failed to counter a current of vaccine misinformation that was already strong in Austria pre-pandemic and has been building since the start of 2021. Myths about the risks of vaccines—including that they make women infertile—have spread online and been fanned by politicians from the far-right Freedom Party, the third-largest force in Austria’s parliament.

Why were people protesting in Europe?

Many Europeans are tired of the seemingly unending cycle of restrictions. Anger over recently imposed rules has sparked large protests in Belgium, Croatia, Italy, Northern Ireland and Switzerland over the past week.

Vienna’s march was comparatively tame, but police reported “high levels of aggression” among protesters and the presence of far-right extremists. Human rights groups denounced the wearing of yellow stars by many protesters, an attempt to compare COVID-19 restrictions to the grave abuses suffered by European Jews in the late 1930’s and 1940’s.

Will other countries in Europe introduce vaccine mandates?

So far only a handful of countries worldwide, including Turkmenistan, Indonesia and Micronesia, have announced plans to make vaccines mandatory for all adults. But many western countries, including the U.S., France and Italy, have introduced limited mandates for public employees and health care staff.

To deliver its mandate, Austria’s government will need to develop a legal framework for obligatory vaccination that respects the country’s constitution, and allows exceptions for those who are not able to get vaccinated for medical reasons. In doing so, the center-right government can count on broad support from the main opposition center-left ​​Social Democratic party. But it will likely draw political fire from the Freedom Party, whose leader said last week that a mandate would cross “a dark red line.”

That process—and the extent of backlash from anti-vaccine protesters—will be watched closely in other countries battling low vaccine take up. In Germany, where the vaccination rate is hovering around 70%, Health Minister Jens Spahn says officials are debating the introduction of a mandate. “Probably by the end of this winter pretty much everyone in Germany,” he told a news conference Monday, “will be vaccinated, cured or dead.”