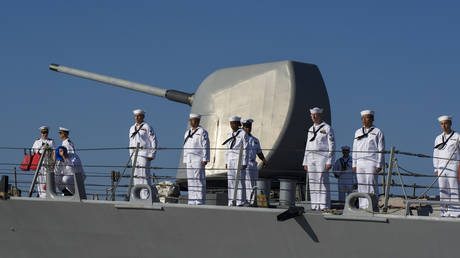 The presence of the USS ‘Milius’ in the Taiwan Strait was creating security risks and undermining regional stability, the Chinese military said following the passage of the US missile destroyer through the contested waterway.

The US Navy warship sailed through the 125km-wide strait on Tuesday in what the American military described as a “routine” mission to demonstrate their nation’s “commitment to a free and open Indo-Pacific.” The Pentagon sends warships to pass between Taiwan and mainland China roughly once a month and regularly deploys warplanes to patrol the area.

US destroyer sails through Taiwan Strait

Beijing considers such operations provocative and detrimental to peace in the region. Responding to the latest of its kind, Colonel Shi Yi, spokesman for the People’s Liberation Army Eastern Theater Command (ETC), said the passage of the American asset was monitored by the Chinese military. He added that its forces would take every necessary step to counter all threats and defend the national sovereignty and territorial integrity of the country.

Taiwan was the last place of refuge for retreating nationalist forces in China’s civil war of the 1940s. Both Beijing and Taipei claim sovereignty over the entire territory of China.

Like many other nations, the US, which supports Taiwan’s self-proclaimed autonomy, maintains a stance of diplomatic ambiguity, recognizing that Beijing has a claim of sovereignty over the island and refraining from formally treating its ally as an independent nation.

Both Washington and Beijing have been increasing their military presence around Taiwan in recent years as the great power competition between the two nations became increasingly tense.