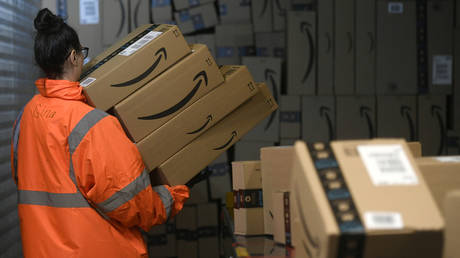 Amazon workers are preparing to disrupt the world’s largest online retailer’s operations on Black Friday with strikes planned in over 30 countries.

Dubbed ‘Make Amazon Pay’, the global workers’ coalition group aims to make the retail behemoth raise wages, pay a fair share in taxes and scale down its “impact on the planet,” as the strikers’ website outlines. The employees’ protest on November 26 is expected to affect Amazon’s warehouses, data centers, offices, and affiliated factories in countries as disparate as the US, Germany, India, and South Africa.

In its list of demands, the broad constellation of 70 trade unions and groups like Greenpeace and Oxfam claims the “pandemic has exposed how Amazon places profits ahead of workers, society, and our planet,” summing up its grievances thus: “Amazon takes too much and gives back too little.”

The online retailer and its founder, Jeff Bezos, raked in record revenues during the height of the pandemic, making Amazon a trillion-dollar company and sending Bezos’ net worth skyrocketing to a whopping $214 billion.

The company’s rank and file workers, however, say their lives are far less rosy, with grueling working hours, minuscule breaks, inadequate pay, and unsafe working conditions being among the most frequently voiced complaints. Over the past year, disenchanted employees have staged numerous protests at various locations, including a similar global strike action on Black Friday in 2020. On top of employee dissatisfaction, Amazon has also faced multiple antitrust probes launched by regulators in the US, the EU, and Canada.

Commenting on the upcoming strikes, Amazon spokesperson Kelly Nantel insisted that while the company is not “perfect in any area, if you objectively look at what Amazon is doing in each one of these areas you will see that we do take our role and our impact very seriously.”