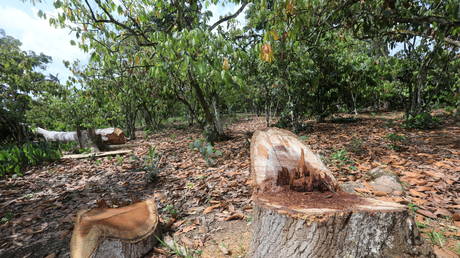 The EU Commission has released draft legislation aimed at tackling the destruction of woodland by introducing import restrictions on products not certified as ‘deforestation-free’.

The draft proposal, which the commission hopes will become binding rules for all member states, seeks to limit the import of beef, cocoa, coffee, palm, soy, and wood if it is not proven “deforestation-free.”

Outlining the legislation, the EU commissioner for climate action policy, Virginijus Sinkevicius, called it a “ground-breaking” proposal that will help fight “illegal deforestation” and “deforestation driven by agricultural expansion.”

Our proposal to fight deforestation will help us protect 1/3 of 🌎 lands.

We start with 6 products that must be deforestation-free 👉🏼 beef, wood, palm oil, soya, coffee, cocoa. pic.twitter.com/Cs9POoydNX

The bill comes after nations at the COP26 summit agreed to work to end deforestation by 2030. It would impose two criteria on imports, requiring items to have been produced in accordance with the origin country’s laws, and not on land that has been deforested or degraded since the start of 2021.

It is not clear when the rules would come into effect; legislative proposals by the commission have to be debated and considered by both the EU Parliament and the Council of the EU before they are passed. The implementation of measures could potentially impact the EU’s trade relations with countries like Brazil, where clearing of the Amazon rainforest hit a new record in October.

During the recent COP26 climate summit, 110 world leaders – whose countries contain around 85% of the world’s woodland – committed to ending and reversing deforestation by 2030, pledging around £14 billion ($18.84 billion) of public and private funds towards the goal.