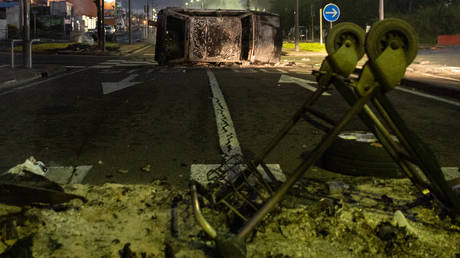 Protests and riots in Guadeloupe have spread to the nearby French territory of Martinique following the introduction of a vaccine mandate on the Caribbean island, with reports of police and firefighters coming under gunfire.

On Monday, 17 trade unions on the island of Martinique called for a general strike to show their opposition to a Covid-19 vaccine mandate for healthcare workers and the imposition of France’s coronavirus health pass. However, the situation escalated when the strikers were reportedly angered at not being received by the governor of Martinique at the end of their first day of demonstrations.

While no injuries have been reported, law enforcement and firefighters were repeatedly targeted by gunfire as they intervened to put out blazes on public highways in the city of Fort-de-France on Monday night.

Protesters have blocked roads around the Caribbean island and have made several demands of the government, including an end to the Covid-19 vaccination mandate for caregivers, as well as broader requests such as an increase in salaries and a reduction in fuel prices.

A large protest against vaxx mandates on the French island of Martinique.pic.twitter.com/XpFT0LbmM4

The violence has spread from nearby Guadeloupe, where chaos descended after labor unions organized walkouts last week to challenge Covid-19 restrictions there, including the introduction of mandatory jabs for health workers.