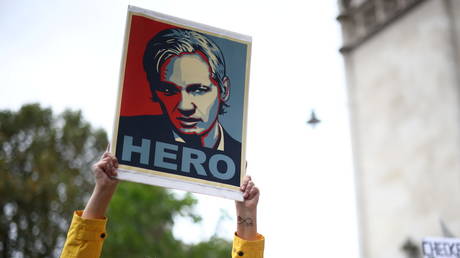 The life of Assange – who is being held in solitary confinement at London’s Belmarsh maximum security prison while a British court considers an extradition request by the US – is under threat, Melenchon wrote on Twitter on Tuesday.

“For years, we’ve been calling for France to accept him,” the head of the leftist La France Insoumise (France Unbowed) party said, insisting that “France shouldn’t remain silent.”

The statement by Melenchon, who won 19.6% of the ballot in the first round of the French presidential election in 2017, follows a visit by Assange’s father, John Shipton, to the Whistleblower Meeting in Paris on Monday.

During the event, Shipton told Sputnik news agency that it would be “an honorable thing” for the French government to grant his son asylum.

“I feel that France hasn’t attacked Julian over the last 12 years and consequently France is free to act in return for the information that WikiLeaks and Julian brought to France,” he said, referring to the website’s revelations of the US intelligence agencies spying on French presidents and hacking into local banks.

Several dozen French lawmakers have also recently called upon Paris to take Assange in, with the Australian-born publisher’s legal team saying last year that their client was hoping to find asylum on French soil.

UK caves, allows Assange to get married in jail

Assange could face up to 175 years behind bars if he’s extradited to the US, where he’s wanted on espionage charges over the release by WikiLeaks of classified documents on Iraq, Afghanistan, Guantanamo Bay, and others.

He was placed in Belmarsh in April 2019 over breach of bail, after being holed up in the Ecuadorian Embassy in London for seven years.

The publisher had been fleeing an arrest warrant issued over sexual assault allegations which he has always denied, and which failed to result in any actual charges due to lack of evidence.

Assange’s supporters insist that he has actually been persecuted over his legitimate journalistic activities and revealing the truth to the public.

The UK High Court is expected to rule on the appeal by the US against a lower court decision to bar the WikiLeaks co-founder’s extradition to America due to the 50-year-old’s poor health condition and risk of suicide.

Assange’s team will then be able to challenge the ruling in the Supreme Court if it’s not favorable.