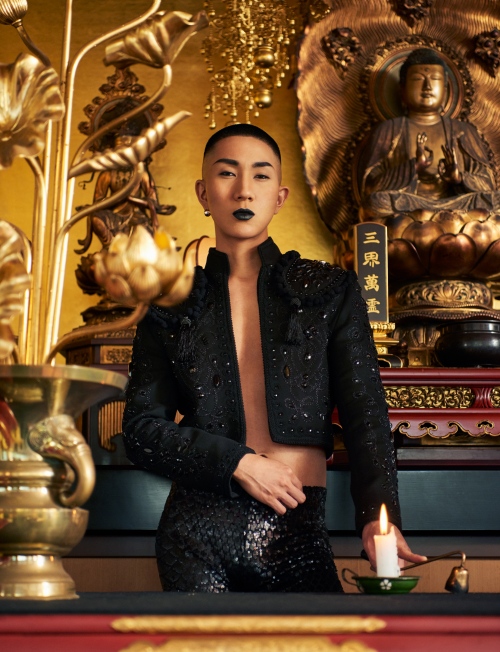 Buddhist monks are typically trained to live austerely, wearing plain robes and few accessories. Kodo Nishimura does anything but. He tends to his family’s temple in Tokyo while working as a makeup artist and LGBTQ activist. “I am both ancient and trendy,” Nishimura, 32, says over Zoom from his home in the Japanese capital, wearing a Buddhist robe and just a little tinted lip balm.

The day before, he worked 13 hours as the makeup director for the Miss Universe Japan finals, leading a team of six assistants to ensure contestants, judges and former winners all looked fabulous. His makeup career and activism landed him an appearance on Netflix’s Queer Eye: We’re in Japan! in 2019, and his clients include the musical sister duo Chloe x Halle and Christina Milian. In February, he is releasing his first English-language book, This Monk Wears Heels, an autobiography that weaves his personal story with Buddhist teachings.

Nishimura wasn’t always so comfortable living with both sides of himself, but he hopes that sharing his journey can help others to learn to love themselves.

Though he grew up watching his parents, both monks, presiding over funerals and ancestor worship ceremonies at their 500-year-old Buddhist temple, Nishimura never wanted to follow in their footsteps. He always thought Buddhist life was incompatible with his identity. At the time, he didn’t see the point of chanting, and shaving his head was unthinkable because he adored long hair. “As a child who loved Disney princesses, it was the total opposite of what I wanted to be and what I loved,” he says.

Nishimura knew from a young age that he was attracted to men, and considers himself “gender-gifted,” a term that describes someone whose gender expression goes beyond the binary. But throughout his high school years in Japan, Nishimura felt ashamed of his sexuality and kept to himself to avoid getting bullied by classmates.

Studying at Parsons School of Design in New York City allowed him to find acceptance as an LGBTQ person. His desire to fully express himself and become spiritually stronger gave him the courage to embrace his Buddhist roots. At 24, he began monk training in Japan while traveling back and forth to the U.S. to work as a makeup artist. That same year, he came out to his parents. To his surprise, his father, a professor of Buddhist studies, told Nishimura to live the life he wants.

Read more: What Asia’s LGBTQ+ Movement Can Learn From Japan

But Nishimura still worried whether he could remain true to himself if he had to give up his passion for makeup and fashion to become a monk—and whether his sexuality would ever be accepted by others of his faith. A well-respected master cleared his doubts. “Everybody can be equally liberated,” Nishimura recalls being told. “Buddhism is accepting, and it doesn’t deny anybody based on their sexuality or color or ethnicity or sex or disability.”

That advice helped Nishimura to live confidently in both worlds. After completing training over the course of two years, he was certified as a monk in 2015. It is common for monks in Japan to take up other professions. For Nishimura, he chooses to promote Buddhist teachings while empowering people through fashion and beauty.

He thinks Buddhism and makeup, though seemingly contradictory, serve the same purpose. “Everybody should have confidence in their existence. So I may be using different mediums, but I’m helping them to feel confident physically and mentally,” he says.

He is also on a mission to spread the message of equality in Buddhism. He gives talks on LGBTQ issues, and hopes to inspire leaders to change laws—especially in Japan, which currently does not have any national legislation protecting LGBTQ people from discrimination.

Nishimura still lives in the temple where he was born and raised—keeping it clean and performing rituals alongside his parents—when he’s not jet-setting around the world doing makeup. He doesn’t keep the strict routine he learned during his training, as he believes repeating the same tasks over and over again limits his ability to grow and bring about change. The only real constant is meditation, which Nishimura says helps him find balance in his mind.

He usually tries to dress down and wear only minimal makeup while working at the temple, so as not to distract from his sacred duties. Even so, he is unafraid to be seen in front of a Buddha statue in colorful outfits with full makeup and sparkly earrings. “I want to stretch the horizon and inspire people,” he says, “I can be a monk wearing heels, so you can be who you are.”