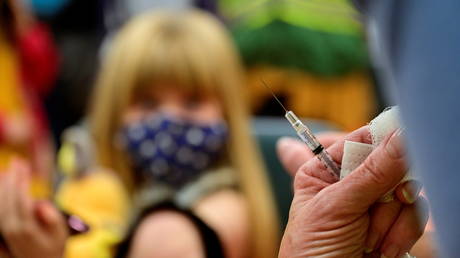 Israel has begun administering Covid-19 vaccines to kids aged between five and 11, the youngest age group yet to be approved for the jabs, with tens of thousands of immunizations scheduled for youths in the coming days.

Health officials said “several hundred” children in the five to 11 age group were vaccinated on Monday, as cited by the Times of Israel, noting that another 24,000 are booked for their shots on Tuesday, or about 2.5% of those eligible in the younger demographic.

“The disease is mild [in children], but there are cases where the disease can continue with long-term symptoms such as insomnia and muscle aches,” Israel’s Covid-19 czar Salman Zarka told reporters, adding “Along with protecting children, the vaccine provides a solution to a normal and uninsulated life. It will help parents get back to normal.”

The health official also stressed that millions of children in the same age group had already been vaccinated in the United States with “effective results” in a bid to reassure parents, noting that the government would make the process “as easy as possible” using mobile immunization sites.

The move comes just one day after Prime Minister Naftali Bennett warned that Israel could be seeing an outbreak disproportionately affecting children, despite younger age groups largely being spared the worst symptoms of the virus throughout much of the global pandemic.

Of Israel’s population of around 9.4 million, 1.2 million kids fall into the five-to-11 age group. As of this month, that group makes up more than a third of new Covid infections in the country, according to Health Ministry data. The ministry has suggested that one in every 3,500 children infected with Covid-19 will later develop a condition known as Multisystem Inflammatory Syndrome, in which organs become inflamed, including the heart, lungs, kidney and even brain, requiring intensive treatment. The ailment is fatal in between 1 and 2% of cases.

Nonetheless, some parents remain hesitant, with Health Ministry spokesperson Sharon Alroy-Preis recently estimating that “around half” of Israeli parents are currently opposed to vaccinating their children, though noted that “it makes sense that part of the population is undecided and wants more data.”