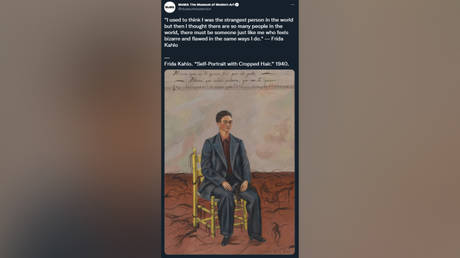 The Museum of Modern Art in New York has admitted it wrongly attributed a quote to renowned surrealist artist Frida Kahlo. The original comment was reportedly made by a 15-year-old girl in 2008.

On Monday, the Museum of Modern Art (MoMA) tweeted a 1940 self-portrait by Frida Kahlo accompanied by what they claimed was a quote by the Mexican artist herself.

I used to think I was the strangest person in the world but then I thought there are so many people in the world, there must be someone just like me who feels bizarre and flawed in the same ways I do. — Frida Kahlo

However, three days later, the New York-based museum admitted that it had “erroneously attributed” the quote without providing further information.

According to an online fact checker, ‘quoteinvestigator.com’, the earliest appearance of this quote was on the website of mail art project ‘PostSecret’ in March 2008. It was reportedly printed on a postcard and mailed to Frank Warren, the founder of PostSecret. Warren said he ran a community art project in which he encouraged people to write personal secrets on homemade postcards. Some were displayed on his website.

Responding to the museum on Twitter, one person claimed it was their daughter, Rebecca, who had written the postcard and secret note at the age of 15. Another person also attributed the quote to a friend, “Becky,” noting the PostSecret background story.

While some people called on the MoMA to take down the original tweet, others ridiculed the museum.
“It’s really embarrassing you don’t fact-check your social media posts,” one person wrote, sharing an image of the original postcard.

Another person shared a meme with a fake Abraham Lincoln quote in which the former US president proclaims, “the problem with quotes found on the internet is that they are often not true.”

Kahlo, one of the most prominent artists of the 20th century, was best known for her numerous self-portraits. The Mexican’s works were often inspired by nature and dealt with themes including identity, the human body, and death.