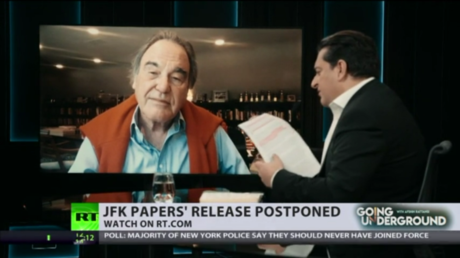 The Oscar-winning director told Afshin Rattansi how he was baffled by President Joe Biden’s decision to once again postpone the release of classified files on the assassination of the 35th president, John F. Kennedy, in 1963.

A White House memo written last month alleged that, because of the Covid-19 pandemic, the National Archives and other agencies needed “additional time” to prepare the Kennedy files for publication. The release of the documents was delayed until December 15, 2022.

“That was the official reason. I don’t know how that applies because I don’t know why you can’t read or think while you have Covid,” Stone told the host of RT’s ‘Going Underground’.

Former President Donald Trump released around 19,000 declassified documents, many of them with redactions, from the JFK case in 2018. However, others were withheld on the grounds of national security.

‘I don’t know how that applies because I don’t know why you can’t read or think while you have COVID…it makes me cry’@TheOliverStone on Biden blocking the release of classified JFK papers, citing COVID-19 as the reason

“Not only he backed down at the last second and refused to release roughly 20,000 documents that we’re interested in,” Stone said of Trump. “He illegally added a step: he said that the next time the National Archive had to be also consulted. It was originally a decision made by Congress that the president was the last one to say anything to stop [the publication].”

Stone’s new documentary, ‘JFK Revisited: Through the Looking Glass,’ premiered at the Cannes Film Festival last summer. Stone told Rattansi in July that Kennedy may have been killed in “a very organized black op” for his anti-colonial policies and desire to end the Cold War.

Watch the full interview on RT.com on Wednesday.