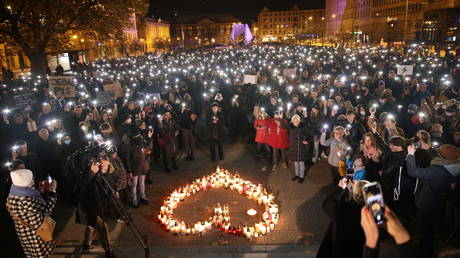 It is legal for doctors to terminate a pregnancy that threatens the life or health of the mother, Poland’s Health Ministry has said after the death of a young woman sparked an outcry over Warsaw’s restrictive abortion laws.

The statement, issued on Sunday, comes in response to the death of a 30-year-old woman in her 22nd week of pregnancy. She passed away from septic shock in September, but the case became more widely known recently.

According to the lawyer representing the woman’s family, doctors did not end the woman’s pregnancy despite knowing her fetus lacked amniotic fluid. She claimed medical personnel at the hospital in Pszczyna in southern Poland waited instead of carrying out an abortion.

Physicians at the hospital have been suspended and authorities are investigating the case.

In the notice issued to doctors, the Health Ministry insisted that “the mother’s life and health are the most important” in incidences where women are at risk, listing off situations such as suspected infection of the uterine cavity and hemorrhages.

“It must be strongly emphasized that doctors must not be afraid of making obvious decisions based on their experience and available medical knowledge,” the directive said.

The young woman’s death sparked an outcry, prompting rallies across the country, with the latest demonstrations occurring this weekend. The largest protest, held in Krakow, saw thousands hold a minute of silence in her memory and march to the headquarters of the city’s church authorities.

Activists have blamed Poland’s Constitutional Tribunal for the mother’s death and have claimed she is the first known victim of the body’s near-total ban on terminations in the country.

Warsaw restricted its abortion laws in October last year after ruling that terminations for fetal defects were unconstitutional. Rape and/or incest, or where the mother’s life or health is in danger, are the only exceptions.