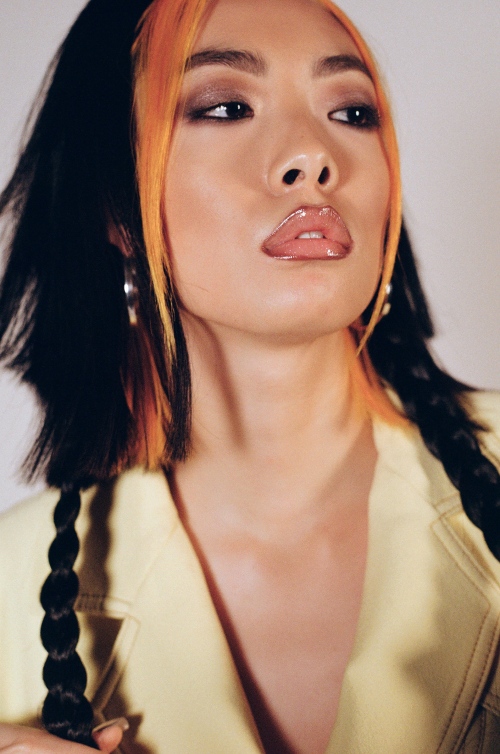 Rina Sawayama calls her favorite songs her “problem childs.” They’re the Japanese British singer-songwriter’s deeply personal tracks that record labels are wont to reject. Take 2019’s “STFU!,” which rages against the racism Sawayama, 31, often faces as a woman of East Asian descent. The song hit multiple walls before Dirty Hit, the indie record label she now calls home, agreed to release it. Other times, it’s Sawayama who says no. After presenting her 2018 single “Cherry,” a proud coming-out song about her pansexual identity, she recalls one label praising its “gay stuff.” “I was like, Yeah, you’re not signing it,” she says, laughing.

For Sawayama, it’s crucial to partner with the right people to amplify her stories—especially since she devotes her songwriting to crafting ones that rarely get told. “If it’s a unique story coming from a marginalized group, it’s important that labels let artists be themselves,” she says over Zoom from her home in London. And she is fully herself on Sawayama, her 2020 debut studio album. While daringly blending genres including nu metal, rock and R&B to pioneer a new kind of pop sound, the artist intimately probes at subjects like race, sexuality and growing up in an immigrant family in the U.K. “I’m so fortunate I get to write songs for a living. I’m not going to waste that by writing whatever is already out there,” she says.

Sawayama was already vocal about being Asian and queer before signing to a label; releasing music was just much harder. She didn’t begin to pursue music full-time until around four years ago. In 2017, she independently released her EP Rina, funding the project by working in an ice cream van, a nail salon, an Apple store and by modeling. As her career has progressed, her forthright expression has extended beyond her lyrics to her visuals. The “STFU!” music video opens with a first date between Sawayama and a white man who commits a series of microaggressions before she roars into the camera, laughs maniacally and launches into the raucous song. “From the beginning, I’ve been passionate about talking about misrepresentation of Asian people,” she says. In other songs, she grapples with how her immigrant family has shaped her. “Dynasty” and “Paradisin’” are infused with reflections on intergenerational pain and exchanges with her mother from her teen years.

Read more: How a Long History of Intertwined Racism and Misogyny Leaves Asian Women in America Vulnerable to Violence

“Chosen Family,” a loving tribute to her LGBTQ community, was originally released on her album but saw new life when she collaborated with Elton John on a duet earlier this year. “It’s so common that queer people get pushed out of their families. And then they find another family that they can be part of,” Sawayama says of the song’s inspiration. She’s excited about the increasing LGBTQ representation in music, from Lil Nas X dominating the charts to Sam Smith and Demi Lovato coming out as nonbinary. Sawayama has also demonstrated her support through actions like signing an open letter in 2020 to the U.K. Minister for Women and Equalities that called for a ban on conversion therapy.

Her dedication to fighting for inclusivity has extended to music awards. In July 2020, #SawayamaIsBritish trended on Twitter after she spoke out about being ineligible to be nominated for the Mercury Prize and the BRIT Awards. Though she has lived in the U.K. for most of her life, she could not be considered for the awards because she holds an “indefinite leave to remain” visa instead of a British passport. (Sawayama was born in Japan, which does not allow dual citizenship.) “I thought their rules around eligibility were outdated,” she says. Following a conversation with the British Phonographic Industry, which governs both ceremonies, she shared in February that the organization was changing its rules—those without citizenship could now be nominated. “It was making people aware that there’s still gatekeeping in culture in the U.K., which is such a diverse country,” she says.

Sawayama has nearly finished writing her second album, due next year. She says the upcoming project addresses topics she has never talked about. “I uncovered a couple of things about myself, and it really landed me in a weird place psychologically,” she says of her pandemic lockdown experience. “Writing about it has kind of healed me,” she says. If it’s anything like her previous work, its brutal honesty will likely prompt healing in her listeners too. “Some people think doing better is earning more money and reaching more career highs, and I think that can become pretty futile,” Sawayama says. For her, it’s always been—and always will be—about something else: “Making people feel seen.”