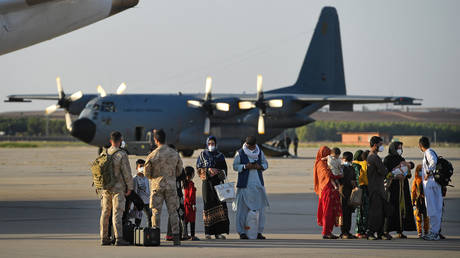 Madrid has evacuated a further 160 Afghans that were left behind after August’s hasty evacuations from Kabul following the Taliban’s takeover. Spain’s Defense Ministry said the evacuation took place via Pakistan.

On Tuesday, the ministry announced that the second repatriation plane arriving from third countries had landed in Torrejón Air Base near the Spanish capital from Islamabad after 83 Afghan allies had arrived the day prior.

The group of 160 Afghan nationals, comprised of 28 families and more than 50 children, were greeted by an array of Spanish officials at the runway, including Minister of Foreign Affairs José Albares and Minister of Defense Margarita Robles.

Prime Minister Pedro Sanchez said earlier on Tuesday that Spain is “determined to evacuate all our former Afghan collaborators at risk” and that its immediate priorities are “to advance evacuation efforts, guarantee humanitarian assistance and respect for the human rights of all Afghans… especially of women and girls,” while speaking at the G20 summit on Afghanistan.

Sanchez also promised to contribute €20 million ($23mn) through the United Nations with the aim of to contribute to providing basic services to the entire Afghan population.

Taliban recognition still off the table for Berlin, Merkel says as EU pledges $1.2 billion in aid to Afghanistan

The evacuations come after Albares visited Pakistan and Qatar last month to ask for their assistance in recovering more Afghan workers who had been left behind.

Since the start of the evacuation missions in August, Madrid has repatriated more than 2,400 people, according to a statement from Spain’s Defense Ministry.