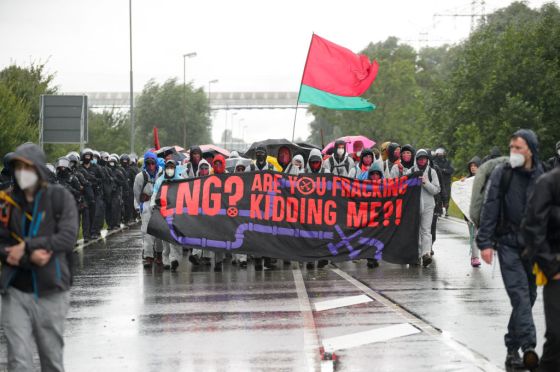 A version of this story first appeared in the Climate is Everything newsletter. If you’d like sign up to receive this free once-a-week email, click here.

Russian president Vladimir Putin had some unsolicited advice for the rest of Europe last week. Speaking at a government meeting Oct. 5, he warned that the energy crisis currently roiling the continent—which has pushed natural gas prices to five times their level this time last year—is the result of the E.U.’s world-leading push to cut carbon emissions. “Some people are speculating on climate change issues, […] some are starting to cut back on investments in the extractive industries,” he said. “There needs to be a smooth transition.”
[time-brightcove not-tgx=”true”]

It’s a familiar argument: that only a very slow phase out of fossil fuels, allowing for continued investment in the sector for decades, will allow us to keep the lights on, and prices affordable. It was heard in February, when Republicans blamed the expansion of renewable energy for a power crisis in Texas. It’s being made inside the E.U., too. Hungarian Prime Minister Victor Orban has blamed the gas price spikes on the bloc’s carbon tax system, viewed as the E.U.’s main tool to drive down emissions, and argued that a planned expansion of the tax should be scrapped. (Fossil fuel industry commentators agree, naturally).

There is a link between the push to cut emissions and Europe’s sky-high gas prices, but it’s much more complicated. The E.U. and the U.K. have become increasingly reliant on imports of natural gas in recent years—in part because natural gas, though a fossil fuel, has a number of qualities that make it useful for bridging the transition between oil and coal and renewables. That reliance has made Europe vulnerable to fluctuations in the global gas market, which is currently experiencing surging demand due to pandemic recoveries and cold weather in Asia, as well as—depending on who you ask —possible price manipulation by Russia. At the same time, an unfortunate confluence of conditions has sapped the production of many kinds of renewable energy around the world (e.g. a drought in South America has cut hydropower generation while windless weather has stopped the U.K.’s offshore turbines from spinning). And, the carbon pricing system, first introduced in 2005, probably has driven a small amount of the cost increases—around 20%, per E.U. estimates.

Those on Putin’s side of the debate say the mistake was not investing enough in fossil fuels. But others say the opposite. “What’s clear is that it is our reliance on fossil fuel systems that makes us so vulnerable,” says Raphael Hanoteaux, a senior policy advisor on gas politics at the European climate think tank E3G. “Even though we have invested very heavily in gas transmission for Europe, we’re no safer against gas price shocks.”

For climate advocates, the secret to a “smooth transition” doesn’t lie in slowing the phase out of fossil fuels but in rapidly “increasing both the supply of renewable energy and the flexibility of the system,” Hanoteaux says. That means investing more in energy storage facilities and setting smarter rules to make the energy market run smoothly (which the E.U. is set to review later this year.) In social terms, governments will need to ease the path forward with aid that reduces the impact of spikes in energy prices on the poorest in society, or risk unrest.

It’s very important who wins the debate over what a smooth transition means. If the narrative that Orban and Putin are pushing around climate action as a threat to energy security gets traction, there is a real risk it will dampen governments’ climate ambition. In the short term, that may trigger a surge in investment in fossil fuel projects (the Dutch government has already floated the delay of planned gas field closure; China is ramping up coal production to keep industry running amid its own energy crunch, which will have a lasting impact on its coal phase-out.)

In the long term, that narrative would make it politically much harder to push emissions-cutting measures through. “Some people are trying to portray this as the first crisis of the energy transition,” Fatih Birol, head of the International Energy Agency, told the Financial Times this week. “They would be wrong, but if this is the dominant voice coming from this situation it may become a barrier to the policies we need to enact to make the energy transition work.”

With the approach of winter putting more pressure on energy supplies, and a crucial U.N. climate conference just weeks away, this communications battle may be about to heat up.

Frans Timmermans, the E.U. commission vice president in charge of the bloc’s Green Deal climate package, says he’s ready to fight it. “Had we done the Green Deal five years ago, now we would not be in this position of [vulnerability to] high energy prices. I hope we can make the argument […] if you were not dependent on natural gas today your energy bill would be much lower,” he told my colleague Justin Worland late last month, pointing out that renewable energy prices have stayed consistently low. “I think that’s an argument that people might be convinced with. We’ll have to try.”