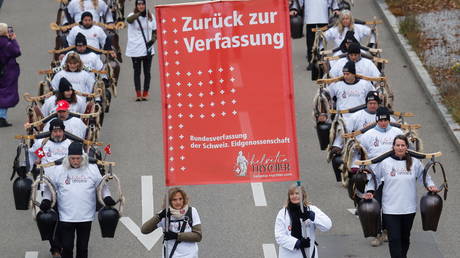 Hundreds of people with torches and Swiss flags filed through a town in Switzerland’s Zurich region, decrying the possible introduction of Covid health passes.

Among the slogans heard during the march on Tuesday night was ‘peace, freedom, the people are sovereign.’ Idiosyncratic bell-ringers and drummers were also present at the rally – a common feature at events like this in Switzerland in recent months.

The protests came just days before the Sunday referendum, in which the Swiss will decide whether or not the Alpine country needs to introduce Covid passes. Tuesday’s rally passed without incident, with protesters sticking to designated pedestrian areas.

Similar demonstrations also took place last Saturday in the cities of Zurich and Lausanne, with several thousand people attending. Other protests such as this one over the past few months did end in violent clashes with the police.

In Bern, fences have been erected to prevent protesters from accessing the government and parliament grounds. Swiss authorities have also had to provide additional security to a number of officials, including the country’s health minister, who has reportedly been targeted with insults and even death threats.

According to a recent poll, 61% of the country’s population is in favor of amendments that would enable authorities to introduce sanitary passes.

Even though 65% of the population is fully vaccinated, Switzerland has been witnessing a surge in Covid cases over the last few weeks.

However, the country’s government has so far stopped short of imposing new nationwide restrictions, arguing that the situation differs from region to region. According to them, the decision of whether or not to put in place new curbs will rest with local authorities. In a statement released on Wednesday, the Swiss government warned, however, that it is closely monitoring developments, as they could worsen in the weeks to come.