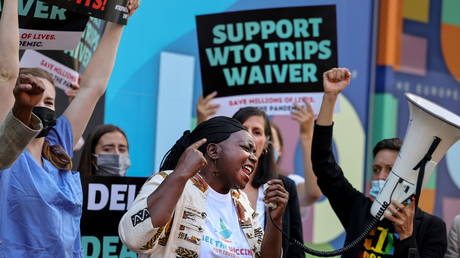 Scores of activist groups and civil society orgs have called on the World Trade Organization to halt an upcoming meeting, insisting the body stop enforcing intellectual property laws that fuel “vaccine apartheid” around the globe.

A coalition of more than 130 groups calling itself the ‘Our World is Not for Sale Network’ penned a letter to the international trade bloc on Wednesday, saying a WTO ministerial conference set for next week should not go ahead until the organization approves a waiver on IP rights known as the TRIPS agreement.

“The institution whose rules enforce vaccine apartheid is, unbelievably, attempting to have a meeting under conditions of vaccine apartheid, without having first resolved that apartheid by agreeing to the TRIPS waiver,” the letter said.

To proceed under these circumstances will further erode the WTO’s legitimacy, and undermine the credibility of the new Director-General, at a time when the Organization’s credibility is already at an all time low.

The group also claimed that a formal ministerial meeting is not required to greenlight the waiver, and that the decision could be made unilaterally by the WTO General Council in Geneva.

Due to ongoing pandemic restrictions around the world, some member states will be unable to send representatives to the meeting. While the WTO “claims to be a consensus based organization,” going ahead with the event without all members present would ensure that decisions made there “will lack any pretense of legitimacy,” the letter added.

The WTO itself initially took the IP waiver proposal under consideration last year, an idea first floated by India and South Africa. No international pause on Covid-related pharmaceutical patents has been implemented since, however, despite some rhetorical support from the US government.

Big Pharma firms, meanwhile, have come out in opposition to the concept. In May, a federation representing the industry’s largest companies – among them Pfizer, AstraZeneca, Bayer, Eli Lilly, La Roche, GlaxoSmithKline, Johnson & Johnson and Merck – criticized the waiver plan as the “wrong answer” soon after US President Joe Biden endorsed it. Some European nations have also rejected the proposal, saying it would undermine years of costly research and development.