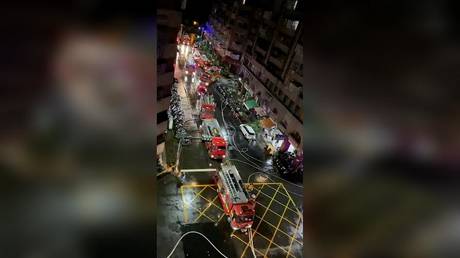 At least 25 people have died and 55 have been taken to hospital after a 13-story building caught fire in the early hours of the morning in Taiwan. The blaze was described as “extremely fierce,” while the source remains unknown.

The mixed-use building, seemingly primarily residential, caught fire on Thursday morning, around 3am local time (7:00 GMT), in the city of Kaohsiung, southern Taiwan, according to fire department officials. Some 75 vehicles and 159 firefighters were dispatched to take on the blaze. The fire was extinguished around 7:17am, but the building’s lower levels have been completely blackened. Firefighters continued their search and rescue efforts throughout the afternoon.

The head of the fire department told journalists that at least 11 people found by the emergency services were taken straight to the morgue. A further 55 were taken to the hospital, including 14 people who showed no signs of life; in Taiwan official confirmation of passing must be made at a hospital.

China and India are locked in a clash that goes far beyond a few kilometres of disputed land; their enmity and distrust runs deep

A statement from the fire department described the blaze as “extremely fierce,” and noted that many floors of the 13-story block had been completely destroyed. The source of the fire remains unknown although eyewitnesses told local media that they heard an explosion at around 3am.

Taiwanese media described the block as a “ghost building” and said it was in a state of deterioration; it is around 40 years old. The block’s two underground floors were not in use, while floors one through to five were abandoned. Taiwan News says approximately 120 households were residing on the seventh through 11th floors.