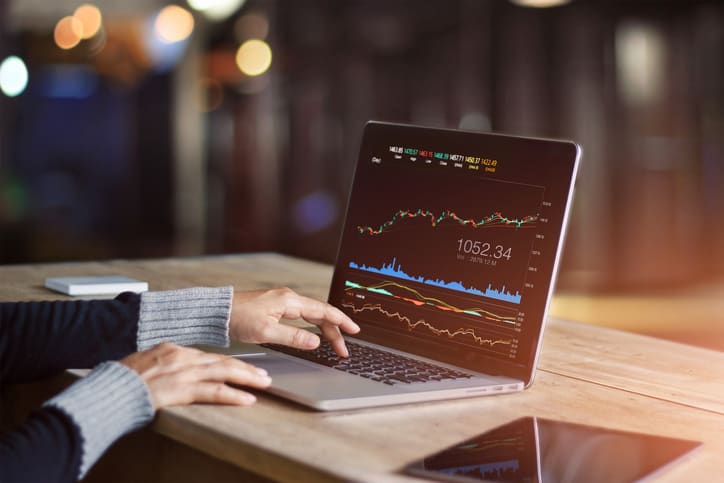 If you’re interested in trading, you’ll know the Tesla share price is notorious for its volatility. Just this week, shares in the electric car manufacturer dived by more than 10% shortly after Elon Musk asked his Twitter followers to decide on whether he should offload billions of stock.

Despite this, Tesla stock has surged by over 30% in the past 30 days, and it remains hugely popular among investors. So which strategies are traders using to profit from the Tesla share price rollercoaster? Let’s take a look.

Over the past year, Tesla’s share price has experienced a number of huge dips.

Early November was also a good time for those holding Tesla stock. On 4 November, Tesla’s share price reached an all-time high of $1,229 (£917).

How did markets react to Elon Musk’s recent Tweet?

Many have blamed Tesla’s recent share price slump on its founder, Elon Musk. That’s because Musk decided to ask his Twitter followers for advice on whether he should sell 10% of his stock. The poll ended with almost 58% voting in favour of a sale.

Musk says the reason for considering such a high stock sale was to address growing concerns surrounding the lack of tax paid by ultra-wealthy billionaires. According to Musk himself, who is estimated to be worth close to $300 billion, the only way he can pay tax is by selling stock, due to the fact that he doesn’t earn a salary or take bonuses.

How can investors profit from Tesla’s volatile share price?

Last week, Tesla once again topped the list of the most bought and sold shares in the UK. With this in mind, here are three strategies investors are using to profit from Tesla stock.

Some traders look to buy Tesla stock immediately after its price falls in value. While this may seem like a relatively straightforward strategy, research has shown that trying to time the market is often a futile approach. It is certainly far more difficult than it looks.

Investors using this strategy favour a slow and steady approach, with the view that Tesla’s value will be higher years, or even decades, down the line. For this reason, investors playing the long haul game are unlikely to be overly concerned about any short-term swings in the car marker’s value.

It’s worth knowing that this approach is favoured by many big-name investors, including Warren Buffet (though not necessarily with Tesla stock).

Some traders try to profit from Tesla’s rollercoaster share price by buying and selling its stock in quick succession.

Aside from the difficulties of trying to time the market, one other major drawback of this approach is the cost involved with making a high number of short-term trades. That’s because many investment platforms charge a share dealing fee every time you buy or sell a share. So unless big profits are made, high fees can lead to short-term traders ending up in the red.

Are you looking to invest in Tesla?

If you’re looking to invest in Tesla, you can purchase the car manufacturer’s stock through a top-rated share dealing account.

However, always bear in mind that the value of any stock can go down as well as up. Also remember that just because Tesla’s stock price has rocketed during 2021, there are no guarantees it will continue to do so in the future.

Are you new to investing? Our investing basics guide can help get you going in the right direction.

The post 3 trading strategies to profit from the Tesla share price rollercoaster appeared first on The Motley Fool UK.

Shares of Johnson Matthey just crashed! Time to buy this FTSE 100 stock?
4 cheap UK shares to buy under £4
Tesla stock has soared. But is this FTSE 100 share now a better buy?
Here’s a ridiculously cheap penny stock to buy today!
2 FTSE 100 stocks to buy for 2022