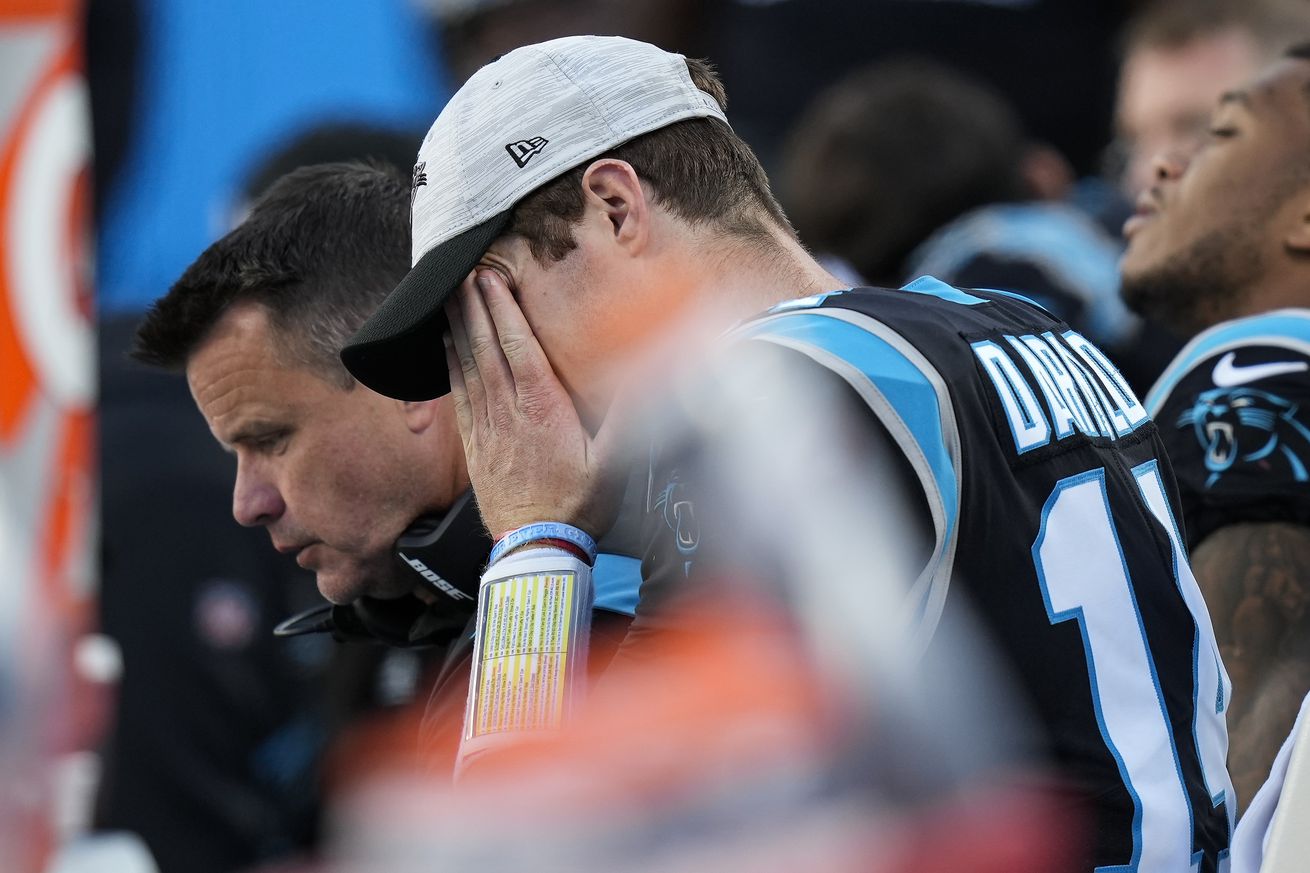 The Panthers are on the verge of being the NFL’s worst team for a long, long time.

The Carolina Panthers aren’t just bad, they’re on the precipice of absolute disaster. I’m not talking for 2021, or even 2022, but the kind of colossal mess than takes damn near a decade to fix while management keeps shuffling the deckchairs on the Titanic.

It wasn’t losing to New England that started this, far from it. By all metrics the Patriots should have beaten the Panthers, who can barely manage to keep their season afloat — but it’s about how lifeless, how listless, how utterly lacking any semblance of fight or heart that had fans in Charlotte booing. Right now those boos are good, they might not feel good, but they are. The next step is apathy, and when you travel down that road it’s very difficult to come back from.

So why were those die-hard fans so raucous with their disapproval? Like so many things in football you can trace it back to a moment, and find it indicative of an entire team’s philosophy. For the Panthers it came late in the first half. Down 14-6 in a game that was already feeling like it was getting away from Carolina, the Panthers had the ball 1st-and-10 at their own 25 yard line, with 24 second left on the clock and three time outs in hand.

Set to receive the kickoff in the second half, the Panthers needed some points — any points. It would have jump started something, anything out of the team’s anemic offense. Instead the Panthers threw a 5-yard route, and let the clock run out. Fans were furious, and they had every right to be.

It’s not like Carolina needed to go for a Hail Mary, but why not move the ball at all? Why not show some urgency? Why decide “we’re good,” when you clearly were not? It was passive, scared coaching — and scared coaching doesn’t win games.

This has become the calling card of the Carolina Panthers. A team that seems more concerned with keeping its image, than actually winning games. This time it hinged on Sam Darnold, a quarterback playing so poorly he should have been benched, but didn’t — because he was the gamble the front office took this offseason. He was their raison d’être, and pulling him would have somehow told the world “we were wrong,” at least in the coaches’ eyes.

Like a gambler refusing to leave the table after some bad beats, the Panthers are desperate to see Darnold turn it around. After all, he showed in the first three games of the season performances so pronounced there was “Comeback Player of the Year” talk emerging after Week 3, but know we know why we wait until the end of the year to hand out awards. Since the Panthers streak ended Darnold has regressed, and Carolina look not only lost for answer, but without a will to fight.

Darnold is the easy target. The lazy one. As we so often do in football as we distill a team’s problems to a quarterback and little else. There is absolutely no doubt he’s been bad, but the issues for the Panthers extend far beyond the guy with the ball in his hands. This is a team that for a decade built around Cam Newton, not in a way that serviced the former MVP’s skills, but instead exploited them. The Panthers were happy to ignore their offensive line for years, knowing Newton had the athletic talents to bail them out. He largely masked their terrible protection with his escapability, and for some reason the team never decided to pivot and fix them when he was gone.

Now you have Sam Darnold, who is decidedly not Cam Newton, and magically the offense can’t operate — much like Teddy Bridgewater before him. Keep in mind that this is a team that was rumored to be desperate to trade for Matthew Stafford, with links to a possible trade for Deshaun Watson. No quarterback except those with the most mobile, league-defining traits can play behind a line that can’t block. Despite this, the Panthers seem to think it’s a possibility, running into brick walls much like Christian McCaffery, who, by the way averaged 3.7 yards-per-carry on Sunday.

So, who are the Carolina Panthers? Distilled to their grimmest, and perhaps most accurate form, they’re a team with incredible receivers, without a quarterback who can throw, overpaying one of the league’s best running backs, who can’t run because nobody is there to block for him. Cap it all off with a coaching staff that seems more concerned with protecting their own image than winning games, and hoo boy is that a shit sandwich.

Sound grim? Hell yeah it does. Sorry Panthers fans, you might be facing down becoming the league’s worst team for several years to come, because there’s no real upside, and only mediocrity in the future.

I am absolutely done with trying to predict this season. That absolutely rules. If you are a fan of lighting things on fire and watching them burn, then boy is 2021 the year for you. This week alone we had:

The Giants beat the Raiders
The Browns blow out the Bengals
The Jaguars beat the Bills
The Falcons beat the Saints
The Titans, minus Derrick Henry, obliterate the Rams

I know people will probably clap back with the Vegas odds, which I know are of critical importance to a lot of people, but in the football world devoid of betting — none of this makes any damn sense. It’s a pretty predictable trait of the season at this point that if you believe in a team, they’re going to let you down.

I’m tempted to try and extrapolate this into some over-arching playoff prediction, but instead I’ll just enjoy this dumpster ride.

The Dator curse is real!

I’M REALLY SORRY! I thought I was avoiding this whole mess by not talking up the Bills too much, but we’ve hit a pattern and I need to recognize it. Last week I wondered how much the Bengals would obliterate the Jets by, and they lost. Now I did it to the Bills, who against any semblance of common sense, lost to the Jaguars.

I don’t make the rules. I am a curse. Keep in mind that last year I picked Russell Wilson as MVP midway through the season. Whoops.

In case you want to keep score at home, here’s who I picked for the end of season awards in 2021.

Winner: Josh Allen, no … not that one

This is the first time in NFL history a player with the same name as the quarterback has recorded a sack. pic.twitter.com/Ye6qkrqbgt

Jaguars defensive Josh Allen finished with eight tackles, a sack, and an interception. In isolation that’s an incredible game, but I am obsessed this was done for some form of cosmic Josh Allen supremacy.

I’m a sucker for a good redemption story and Cordarelle Patterson has quietly become one of the best of the season. Patterson, who’s career has taken some stunning twists and turns, now finds himself as an incredible rotational running back after years as primarily a kick returner, or a change of pace back.

I’m not going to pretend the Falcons have been a feel-good story this season, but Patterson has been a delight. Now the former 1st round pick at receiver is on pace for his best season catching the ball, AND running it — all while capturing the hearts of fans in Atlanta.

On Sunday he finished with 126 receiving yards, his best of the season.

I love to see it.

Water is wet. The Vikings blew another lead. Mike Zimmer will keep his job.

I said the Cardinals would keep getting recognized until they lose, and that still stands — but Sunday might be the greatest example of this. Without Kyler Murray, Arizona still managed to gain 437 yards of offense on an afternoon Colt McCoy, who I remembered was still in the league, threw 22-of-26, for 249 yards and a touchdown.

Obviously it’s ridiculously dumb to say “it’s the system,” because Murray can beat anyone in the NFL and McCoy is still Colt McCoy, but it goes to show just how well installed the Cardinals offense is that they can beat divisional competition without their best offensive player.

I’m still so hesitant to buy all the way in, but damn this team is fun.