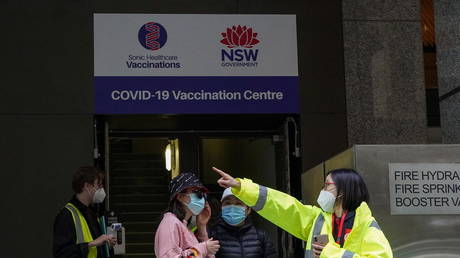 Australian children under the age of 12 could be vaccinated against Covid-19 by early January should there be no setbacks, Health Minister Greg Hunt has revealed, as vaccination of children aged 12 to 15 exceeds 70%.

Hunt told ABC’s Insiders program on Sunday that children under 12 are expected to be vaccinated from “the first part of January” and “hopefully early January.” He added that the matter was “in the hands of the medical experts,” who “operate independently,” and that they were “going as quickly as possible.”

Though plans to vaccinate children against Covid-19 have sparked fierce debate worldwide, the US Centers for Disease Control and Prevention (CDC) cleared the use of Pfizer’s vaccine for children aged 5 to 11 this month.

Pfizer claims that its vaccine has an over-90% efficacy for children in the age bracket, though children without pre-existing conditions are the least likely to suffer long-term harm from Covid.

According to Australian government statistics, 90% of Australians over the age of 16 have had at least one Covid-19 vaccine dose, while 82.8% are fully vaccinated. Vaccination is at its highest in the Australian Capital Territory (ACT) and New South Wales – which are just 5% and 9% away from 100% vaccination respectively – and is at its lowest in Queensland and Western Australia.