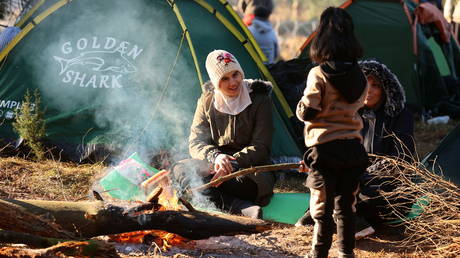 Poland was eager to provide humanitarian aid to migrants who set up a camp at its border with Belarus, but the offer was rejected by Minsk, Polish President Andrzej Duda has said.

The migrants were lacking food and water, RT’s correspondent reported after visiting the makeshift camp on the border between the two countries. He also said Polish security forces prevented the inhabitants from sleeping by directing spotlights at them and playing discouraging audio messages, urging the people to “go home.”

Duda has described the ongoing events as a “hybrid action” by Belarus against Poland and the EU. The authorities in Minsk have been carrying out the attack in “an unprecedented manner,” using the migrants, whom they invited to Belarus and directed towards the border, he insisted.

The Polish president said he had already discussed the crisis with NATO, other EU governments, and exiled Belarusian opposition figure Svetlana Tikhanovskaya. “We’re going to defend the border together with our allies,” he vowed.

The migrant camp was set up on the border on Monday after Polish security forces repelled an attempt to cross into the country by some 3,000 people seeking asylum in Europe.

In late June, Belarusian President Alexander Lukashenko said Minsk would no longer be holding back migrants seeking to reach the EU through its territory.

The announcement was followed by reports of an increase in direct flights to the country from turbulent regions in the Middle East and North Africa. At the same time, Belarus’ neighbors sounded the alarm over a growing number of attempts to breach their borders.

The Belarusian authorities have said they will only discuss the situation with the EU after it lifts all sanctions, including restrictions on airspace, the bloc imposed on Minsk after it grounded an Irish Ryanair flight with opposition blogger Roman Protasevich on board in May.

However, Belarus has denied accusations of deliberately guiding the migrants to the Polish border or using its troops to guard them.