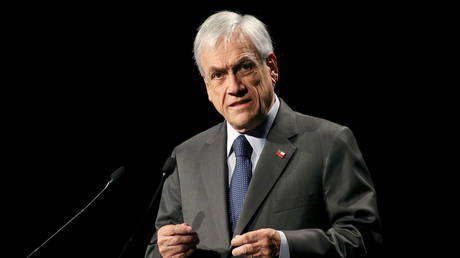 Chile’s Chamber of Deputies has approved a motion to impeach outgoing President Sebastian Pinera over alleged shady business deals that were seemingly exposed in the Pandora Papers leak.

The impeachment motion was narrowly passed by Chile’s lower house early on Tuesday following nearly 22 hours of debate. The motion was supported by 78 MPs, while 67 voted against and three abstained.

The motion is now set to head to the country’s Senate for approval, where it will need to get two thirds of votes to be passed. The upper house is expected to vote on the impeachment just days before the upcoming presidential election, which is set to take place on November 21.

Billionaire businessman Pinera will not partake in the polls, since the incumbent president cannot seek immediate re-election, according to Chile’s constitution.

Chilean president slapped with $3,500 FINE & ‘turns himself in’ after no-mask selfie with stranger stokes public backlash

The case against Pinera stems from allegations raised in the recently leaked Pandora Papers, a cache of nearly 12 million documents related to offshore deals, which the International Consortium of Investigative Journalists (ICIJ) began publishing on October 3. The expose alleged that multiple top politicians were among the list of businessmen with secret offshore accounts.

The leaked documents linked Pinera to the sale of the Dominga mining project through a company owned by his children to businessman Carlos Delano, a close associate of the president. A large part of the deal took place in the offshore haven of the British Virgin Islands.

It is the second impeachment attempt to be made against Pinera during the current term. Back in 2019, an unsuccessful impeachment bid was launched against the president over his crackdown on anti-inequality protests that swept the country at the time.