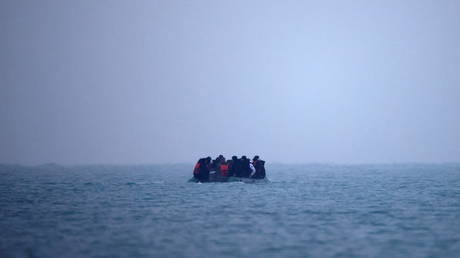 Over 30 migrants have drowned after a boat capsized off Calais, France, during an attempt to cross the English Channel to the UK, in the worst-ever such tragedy yet involving illegal crossings of the waterway.

The accident occurred on Wednesday, when a group of migrants tried to take advantage of calm sea conditions to cross over to Britain. The waters of the English Channel, however, are currently very chilly, which has likely contributed to the large number of fatalities.

The capsized boat and multiple bodies nearby were initially found by French fishermen, who alerted the authorities, prompting a rescue operation. At least 31 people perished in the accident, Franck Dhersin, deputy head of regional transport and mayor of Teteghem, told Reuters. The death toll is expected to grow even further, as at least two people are still reported missing.

France’s PM Jean Castex called the accident a “tragedy,” blaming it on human traffickers and other facilitators of illegal migration.

“The sinking in the English Channel is a tragedy. My thoughts go out to the many missing and injured victims of criminal smugglers who exploit their distress and misery,” Castex tweeted.

A similar reaction was expressed by his British counterpart Boris Johnson, who said he was “shocked and appalled and deeply saddened” by the deaths. The PM convened an emergency COBRA meeting over the incident, to assess the situation.

The incident is the largest loss of life from a single migrant boat capsizing in the Channel. Before the Wednesday drownings, the largest such accident was recorded in October last year, when a migrant family of five died during their attempt to cross to the UK.

The Channel has seen an increased illegal migrant flow this year, with over 25,700 people taking the dangerous journey across the waterway, known for heavy maritime traffic and strong currents. The figure to date this year is already three times higher than the total of crossings registered during the whole of 2020.