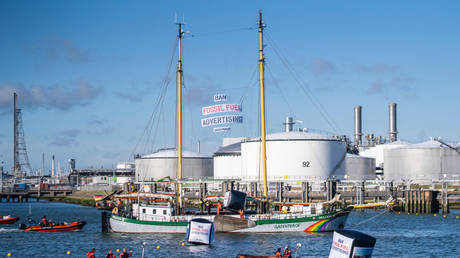 Over 80 activists from a dozen EU states have blocked entry to Shell’s oil refinery in Rotterdam, the Netherlands, to protest against the giant’s “greenwashing” advertisements and call for a new law that bans fossil fuel ads.

On Monday, Greenpeace EU climate and energy campaigner Silvia Pastorelli announced that the group’s activists were barricading Shell’s port to demonstrate against the practices of the oil industry.

“Fossil fuel companies, car companies and airlines have refused to change their polluting business, but use ads and sponsorships to present themselves as the solution to the climate crisis they caused. We’re asking the public to make their voices heard and demand an EU ban on fossil fuel ads,” Pastorelli said in a statement.

Greenpeace’s Beluga II ship anchored up at around 9:00am local time (07:00 GMT), while activists in kayaks, canoes, and inflatable boats blockaded the water.

Activists are putting themselves in the way to block access to @Shell‘s oil refinery in Rotterdam, the biggest in Europe

Footage uploaded to Twitter purported to show police in boats trying to remove the activists in the waters of the port and squash their protest.

You can show your support by signing the #BanFossilAds petition here:

The action comes as Greenpeace attempts to draw attention and signatures to the European Citizens’ Initiative’s petition to prohibit fossil fuel advertising and sponsorships across the bloc. This includes companies selling fossil fuels or vehicles, flights, and ferries running on them.

In a statement published by Greenpeace, the organization said that “the EU has already introduced a directive banning cross-border tobacco advertising and sponsorships,” adding that it is now “time for a similar law against fossil fuel industries for the health of the planet and our future.”

The European Commission is required to consider all petitions put forward under the Initiative that reach one million signatures.

In August, the UN’s Intergovernmental Panel on Climate Change released a damning report on global warming. It was branded a “code red for humanity” by the organization’s Secretary-General Antonio Guterres, who claimed that the findings “must sound a death knell for coal and fossil fuels, before they destroy our planet.”