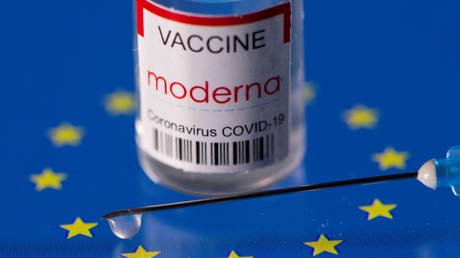 The European Medicines Agency (EMA) has asked for an in-depth review of all data linked to heart inflammation disorders following inoculation with Moderna’s Covid jab, after several countries suspended or advised against its use.

In a safety update published on Thursday, the EMA revealed that its Risk Assessment Committee is evaluating “further data on the risk of myocarditis and pericarditis following vaccination with Spikevax.”

Incidences of the two inflammatory disorders have previously been analyzed after reports of the conditions cropped up across Europe. The first review ended in July 2021, resulting in the drug regulator recommending that both conditions be added to the side-effects list of Moderna’s jab.

The latest notice, however, stated that “the committee has now asked the company that markets Spikevax to perform an in-depth review of all published data on the association of myocarditis and pericarditis with the vaccine.”

Clinical trial findings, as well as “other data available in the public domain,” have been requested by the regulator.

The EMA said that it will continue to monitor the safety and efficacy of the jab and “communicate further when new information becomes available.”

October saw Nordic nations impose restrictions on Spikevax to varying levels. Iceland announced a total suspension of the jab, while Sweden froze its use for all under 30s. Finland, on the other hand, halted its rollout for men born in 1991 and later.

More than 61.6 million shots of Spikevax have been injected into arms across the EU and EEA as of the end of October.