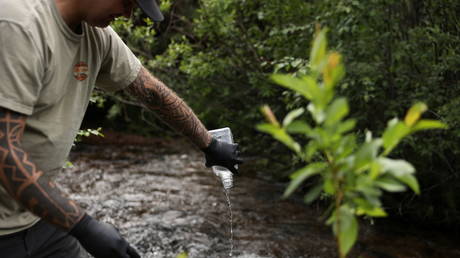 Forests situated within at least 10 UNESCO World Heritage sites have become net carbon sources over the past 20 years due to pressures from human activity and climate change, according to a recently published study.

Pressures such as deforestation and increasingly frequent and severe forest fires, have negatively impacted on forests and their capacity to absorb carbon emission, according to a joint study by UNESCO, the World Resources Institute, and the International Union for Conservation of Nature (IUCN), published on Thursday.

By combining satellite-derived data with monitoring information at site level between 2001 and 2020, the researchers contended that, on the whole, forests contained in natural World Heritage sites absorbed more carbon than they emitted. The total amount of carbon absorbed by these vast green spaces was approximately 190 million tons of CO2 each year, equivalent to half the UK’s annual CO2 emissions from fossil fuels.

However, 10 of the UNESCO forests studied emitted more carbon than they captured due to different disturbances and pressures. The Sumatran rainforest, the Kinabalu Park in Malaysian Borneo, Yosemite National Park in the US and the Blue Mountains in Australia were among the forests which were emitting more carbon than they absorbed.

While pressures on the forests vary, the researchers suggested that human activities such as logging and land clearance for agricultural use were causing these sites to become net carbon emitters. Extreme weather phenomena, such as hurricanes as well as the increasing scale and severity of wildfires, often associated with periods of severe drought, were also predominant factors.

“Our report’s finding that even some of the most iconic and best-protected forests such as those found in World Heritage sites can actually contribute to climate change is alarming and brings to light evidence of the severity of this climate emergency,” said UNESCO’s Tales Carvalho Resende who co-authored the report.

The report comes just a few days before world leaders meet in Glasgow for a UN climate change summit amid increasing concern for the health of the planet.