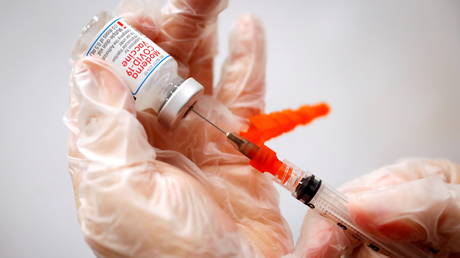 Drawing on recently published data, France’s health authority, the Haute Autorite de Sante (HAS), said the risk of myocarditis from Pfizer-BioNTech’s Comirnaty “appears to be around five times lesser… compared to Moderna’s Spikevax jab” in young people in an opinion published on Monday.

Cases of myocarditis mainly occur within seven days of vaccination, more often after the second dose, and in men under the age of 30, the notice read.

HAS, which acts as an advisor to the French health sector but does not have the power to ban medicines, said the recommendation would apply to first and second doses, as well as a third “booster shot” while it awaits additional data.

For the French population aged 30 and over, however, the body said it backs the administration of Spikevax in this group, stating that its efficacy was slightly higher than Pfizer-BioNTech’s jab.

Last month saw Nordic nations place varying restrictions on Moderna’s vaccine. Iceland has made the widest suspension of the jab, with its health authorities halting its use across its whole population.

Stockholm, meanwhile, announced it was freezing the use of Moderna for all of its population born in 1991 and later. Helsinki followed suit, but halted the inoculant for young, male Finns only based on a study involving Finland, Denmark, Norway, and Sweden that found men under 30 had a slightly higher risk of developing myocarditis.

Oslo also suggests young Norwegian men should consider choosing Comirnaty when they decide to get jabbed.

The European Medicines Agency advised that heart inflammatory conditions myocarditis and pericarditis be added to the list of rare adverse side effects of both the Moderna and Pfizer-BioNTech mRNA vaccines in July. The medical watchdog insists that cases are extremely rare, however.