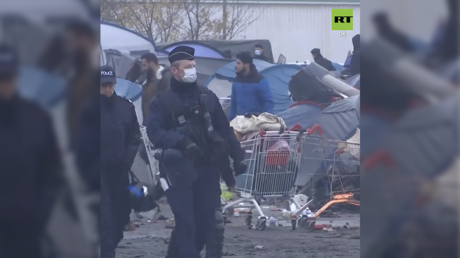 A large settlement of migrants in the suburbs of Dunkirk in northern France has been dismantled, in the wake of yet another wave of tensions with the UK over the growing number of illegal crossings.

“At my instruction, the security forces are evacuating the illegal migrant camp in Grande-Synthe this morning,” French Interior Minister Gerald Darmanin said on Twitter on Tuesday. He added that state services in the region would provide shelter for the group.

Government spokesman Gabriel Attal said the decision to dismantle the camp was primarily based on the intention to put people into shelters ahead of the winter season.

Around 1,500 migrants were evacuated from the site via buses and their tents removed. According to Utopia 56, one of the charities monitoring the process of dismantling the camp, people “were forced to board buses, without being informed of their destination, and some of their personal belongings have been destroyed.”

Tides changing on Channel crossings?
French police began moving some 1,500 migrants on from a camp near Dunkirk amid talks yesterday between Priti Patel and her French counterpart agreeing to stop ‘100 percent’ of Channel crossings after record numbers reached the UK in 2021. pic.twitter.com/PUE9YDCTAY

In a separate tweet, Darmanin announced the arrest of 13 alleged migrant smugglers, “bringing the total to 1,308 since January.”

“These smugglers are criminals who exploit human misery, responsible for irregular immigration,” the minister wrote.

Tuesday’s actions by French authorities came in the wake of a phone call between Darmanin and his British counterpart Priti Patel. The two discussed the increasing number of illegal migrants attempting to cross the English Channel, and reiterated the importance of cooperation in making this route “unviable,” Patel said afterwards.

At Grande-Synthe, near Dunkirk, where demolition work has already begun on the migrant camp.
Around 1,500 people, many of them Iraqi Kurds, have been moved out of the site@SkyNews pic.twitter.com/rHFDHHcxmf

The UK and France have a history of mutual accusations when it comes to illegal migration. While British officials have claimed that French authorities do not do enough to prevent migrants from embarking for the dangerous trip, France’s government has said that the UK should reform its labor market rules in order to become less attractive to migrants.

More than 23,000 people have crossed the Channel by boat this year, compared to 8,404 in 2020, according to Press Association figures.