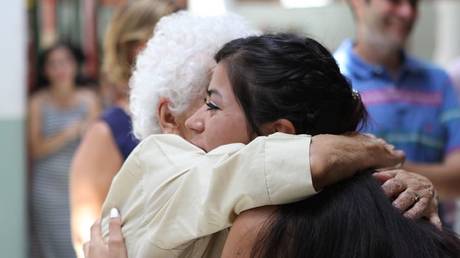 People in the German state of Hessen are reportedly so spooked by Covid-19 that many don’t expect to resume hugging their friends and family members – or even shaking hands – once the pandemic ends.

Almost a third of people surveyed by health insurer AOK Hessen said they will continue to refrain from hugging loved ones, media outlet Hessenschau reported on Wednesday. The poll showed that 39% of Hessians expect to permanently quit shaking hands with anyone, and 64% will no longer shake hands with strangers.

The survey paints a grim picture of the lasting effects of Covid-19 on human interaction, including expressions of affection. Nearly a quarter of the Germans surveyed, or 23%, said they don’t want to invite visitors into their homes in post-pandemic life.

“A lot of people have become more cautious and can hardly imagine a normality like before the pandemic,” Hessenschau quoted AOK Hessen’s senior doctor, Angela Smith, as saying.

The insurer also found that 46% of the survey’s 1,000 respondents will no longer go to concerts, movies or other large indoor events. And 40% said they intend to keep wearing surgical masks in some situations, such as when they’re riding on a bus or shopping at a supermarket, when Covid-19 is in the rearview mirror.

City officials in Gelnhausen, a Hessian town about 40 kilometers east of Frankfurt, have canceled plans for this year’s Christmas market because of rising Covid-19 infections, Hessenschau reported. “We regret that very much, but we cannot answer for such an event given the high incidence,” Mayor Daniel Christian Glockner said.

Covid-19 infections in Germany rose to a record high in the past week, despite implementation of tougher rules that increased pressure on residents to get vaccinated. However, mitigation efforts haven’t been altogether successful. For instance, an estimated 24 people were reportedly infected with Covid-19 at a recent choir concert in Freigericht, even though unvaccinated spectators were banned from attending.