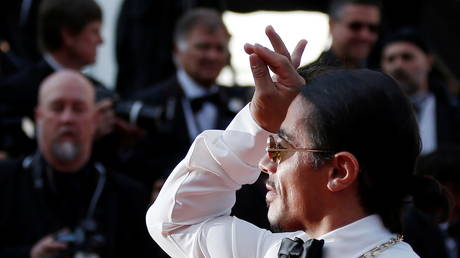 On Tuesday, Facebook operator Meta told Reuters that ‘#saltbae’ was now functioning again after it was blocked globally. “We’ve unblocked this hashtag on Facebook and we’re investigating why this happened,” a spokesperson for Meta stated, adding that the block was global and not just for Vietnam.

Carbon foodprints? The ruling class’ plan to change what you eat

The spokesperson declined to comment on why it may have been blocked. Over the past few days, those searching the hashtag were presented with a message saying community standards had been violated.

The blocking of the hashtag, which relates to celebrity chef Nusret Gokce, came amid intense scrutiny levied at Vietnam’s minister of public security, To Lam. A video of the senior Vietnamese communist being fed a gold-encrusted steak had been posted on Gokce’s TikTok account at this London restaurant, prompting widespread criticism in Vietnam.

Vietnamese Minister of Public Security To Lam stopped for a steak at the famous Nusr-Et steakhouse while visiting the U.K. for the Glasgow climate conference and was hand-fed by “Salt Bae” internet star Turkish celebrity chef Nusret Gökçe.https://t.co/iCkL4jUm2S pic.twitter.com/XhuvFjrakg

Lam, 64, had been in the UK for the COP26 climate summit in Glasgow, but seemingly could not resist a visit to Gokce’s notoriously expensive Knightsbridge restaurant where some steaks can set customers back £1,450 ($1,960).

Many in Vietnam took to Facebook to question how Lam could have let him be filmed eating such extravagant food amid a state crackdown on corruption.