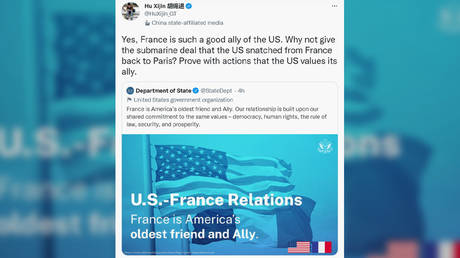 The editor-in-chief of the Global Times has mocked the US State Department after Washington tweeted about the strength of the Franco-American partnership, the US’ oldest ally, and their shared commitments.

On Tuesday morning, the US Department of State took to Twitter to celebrate its relationship with France, which has been strained in recent weeks following the creation of the AUKUS pact. The AUKUS deal saw the US & UK partner to deliver nuclear-powered submarines to Australia, replacing an earlier agreement with France’s Naval Group to build Canberra a diesel sub fleet.

“France is America’s oldest friend and Ally,” the Twitter post read, adding that the “relationship is built upon our shared commitment to the same values – democracy, human rights, the rule of law, security, and prosperity.”

Hu Xijin, the editor-in-chief of the Global Times, was among those to question the State Department’s post in the context of the US row with France over the submarine deal.

The Chinese state media boss said that if France is “such a good ally of the US,” why don’t they “give the submarine deal that the US snatched from France back to Paris?” suggesting that they should “Prove with actions that the US values its ally.”

Letter of contention: Media in Australia obtains document suggesting no promises to proceed with subs deal were made to France

In September, France claimed the US, UK and Australia had blindsided Paris by going behind its back to create a new submarine deal. France’s Naval Group lost out on a deal worth $40 billion, although some, notably in Australia, have suggested the deal was at risk of collapsing for years.

Paris has said it will take time and actions for trust to be properly restored between the old allies. French Foreign Minister Jean-Yves Le Drian called the events a “stab in the back” and even likened the current US administration to that of former president Donald Trump.

France was America’s first ally and French assistance was deemed decisive in America’s victory over colonial superpower Britain. New York’s Statue of Liberty was a gift from the French people to the US, commemorating the two nations’ alliance and American independence.