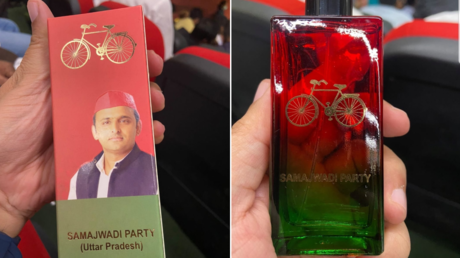 In an attempt to woo voters India’s Samajwadi Party has launched its own perfume, with the scent’s notes of saffron and sandalwood supposedly evoking images of socialism.

Speaking on Tuesday, the party’s president, Akhilesh Yadav, said the fragrance, named the Scent of Socialism, was intended to embody the spirit of their left-wing politics.

According to Indian media, the perfume took two scientists four months to create. They gathered 22 ingredients from across the country, including rose, jasmine, sandalwood, and saffron, and experimented with various combinations before deciding on the final fragrance.

Asked about the aims of the scent, Yadav said, “When people use it, they will smell socialism. It will end hatred in 2022.”

In photos shared online, party faithful can be seen proudly holding the boxed perfume. Its packaging features an image of Samajwadi’s leader, their red and green signature colors, and their logo, a bicycle.

Samajwadi, the main opposition party in Uttar Pradesh, has reportedly told its members to fragrance themselves with the scent before attending public meetings.

Uttar Pradesh Deputy Chief Minister Dinesh Sharma has dismissed the perfume’s launch as a cheap stunt. “The smell of hatred, communalism, appeasement, criminality, and corruption will not be removed from the previous governments by any fragrance,” Sharma said on Wednesday, referencing Samajwadi’s term in state governance.