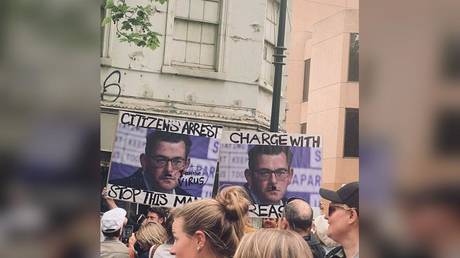 Australia’s Jewish community has condemned the repeated displays of Nazi references at anti-vaccine and anti-lockdown rallies in Victoria, some of which saw the state premier depicted as Adolf Hitler.

Daniel Aghion, the president of the Jewish Community Council of Victoria, claims that references to the genocidal regime of the Nazis amid the current unrest over pandemic rules is a false equivalence.

“The Nazis had the intention of wiping from the face of the Earth a race or religion simply because of what they were,” Aghion told Guardian Australia. “Nothing in the current proposals is remotely like that, and the comparison to Nazi Germany is therefore shocking, inappropriate and wrong,” he added.

I don’t agree with Daniel Andrews Pandemic Bill. It’s overreach & has rightly been condemned. But placards depicting the Premier in Nazi uniform is offensive & wrong.

It shows a lack of understanding of history. It fuels hatred. It’s dangerous & has no place in public debate. pic.twitter.com/9QN5rj5hym

Wendy Lovell, a Liberal MP, had also claimed laws proposed to govern future pandemics were similar to Germany’s 1933 Enabling Act – which allowed the Reich government to issue laws without the consent of parliament and preceded atrocities, most notably the Holocaust.

MP Bernie Finn had gone as far as to share a social media post depicting the state premier as Hitler. It was later deleted.Laws proposed by Andrews seek to grant powers to the state leaders in the event of another pandemic. Under the move, the minister “may make any order… that the minister believes is reasonably necessary to protect public health.”

Opponents claim the legislation, which would see power concentrated with the head of state and health minister, is too broad and far reaching.