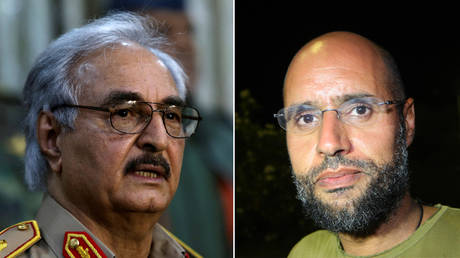 Libyan military commander Khalifa Haftar is set to challenge Gaddafi’s son for the top job, announcing his presidential bid. The election will take place on December 24.

“I declare my candidacy for the presidential election, not because I am chasing power but because I want to lead our people towards glory, progress and prosperity,” the de facto leader of Eastern Libya said in a televised speech.

Haftar added that the election is the only way out of the severe crisis the country has been plunged into.

The announcement was expected; in September, Haftar announced that he was temporarily stepping down as head of the force known as the Libyan National Army, fulfilling the requirement for presidential hopefuls to suspend public work three months before an election.

Haftar will run against the son of former leader Muammar Gaddafi, Saif al-Islam Gaddafi, who represents the Popular Front for the Liberation of Libya.

Haftar’s presidential bid is likely to anger many who consider him a war criminal responsible for the indiscriminate killing of civilians during his military campaign. A number of civil lawsuits have been filed against him in a US federal court for alleged war crimes. Haftar has both US and Libyan citizenship, and owns property in Virginia.

Following years of civil war and political chaos after the NATO-backed intervention that saw Muammar Gaddafi deposed and brutally murdered, the upcoming election is widely viewed as an opportunity for political settlement and the long-awaited unification of the country, divided now between Haftar’s forces and the Tripoli-based Government of National Accord. However, there is still no consensus on the legal grounds for the election, which could become an obstacle for the peace process.