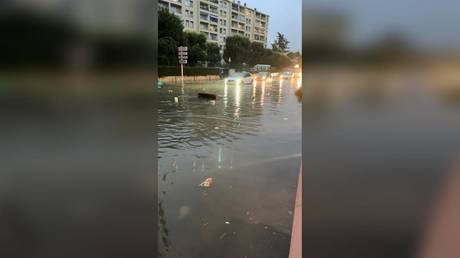 Parts of southern France have been placed on alert after a weekend of torrential rain caused floods, prompting authorities to shut schools as weather experts forecast more downpours over the next 24 hours.

On Monday, the mayor of Marseille, Benoit Payan, called on parents to collect their children from school and stay at home for the rest of the day amid concerns that more rainfall would intensify flooding.

“There is a lull until 12 noon, you have to pick up your children from school, stop using the cars and stay at home,” Payan told BFMTV. All schools in the department are closed for the remainder of the day.

Earlier on Monday he said that some schools would remain open for parents that did not have a solution. It is unclear whether these schools have now been closed.

Many schools across the wider region also elected to shut. Aix-Marseille University also announced that it was closed on Monday.

The Bouches-du-Rhone department, which includes the city of Marseille, has been placed on red alert by France’s meteorological services. A second wave of more intense rain is expected on Monday afternoon. “This turbulent weather could be accompanied by hail and strong gusts of wind,” Meteo France wrote.

Footage from Monday morning already shows part of the city flooded, with more than 100mm of rain falling over the weekend across the region. According to France Bleu, three months’ worth of rain fell in Marseille on Sunday night and into Monday morning.

In other images, Marseille’s port appears to merge with the harborside, with flood waters extending across the promenade.

In some parts of southern France, precipitation over the previous 24 hours has exceeded months of average rainfall. In the Cevennes mountain range, there has been between 150 and 300mm of rain, and up to 458.5mm in Villefort, Lozere, equivalent to between three and four months of precipitation in normal circumstances.

Forecasters are suggesting there could be as much as 240mm still to come on Monday.

Vaucluse, Var, Alpes-Maritimes, Alpes-de-Haute-Provence, and Haute-Corse on the island of Corsica have all been placed on amber alert.

One person died on the A7 motorway in an accident on Monday morning, according to La Provence. There have been no further reports of fatalities caused by the extreme weather. Some 3,000 households were left without power on Sunday after heavy rain and fallen trees cut electricity supply in the Gard department.