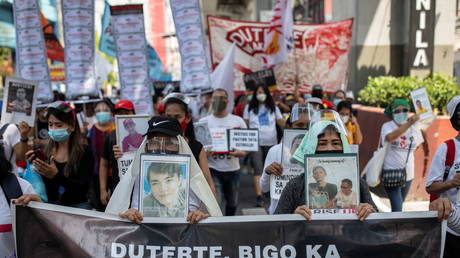 More than 150 police officers could face criminal charges over their actions during President Rodrigo Duterte’s war on drugs, the Philippines Justice Department has said, citing the results of a preliminary probe.

The Justice Department has examined 52 cases related to the war on drugs, which saw the death of suspects, as part of its second review of the issue. The first review was completed in December 2020.

The cases are focused on the actions of a total of 154 officers, according to Justice Secretary Menardo Guevarra. Intelligence gathered by the police internal affairs service suggests that “officers involved in these cases were not only administratively liable, but the existing evidence pointed to their possible criminal liability as well,” Guevarra told local media on Sunday.

The cases will now be forwarded to the National Bureau of Investigation (NBI) “for case build-up and filing of criminal complaints if warranted by the evidence,” the official said, adding that the NBI and the police had agreed to cooperate on the investigation and would meet on October 5 to discuss the details.

The Justice Department would then turn its attention to a further 100 cases that are either pending preliminary investigation or are already at trial stage, and that involve “law enforcement agents charged with or accused of violating the law in connection with the war on drugs.”

Guevarra has been leading a probe into the drugs war for quite some time. The justice secretary had twice reported to the UN Human Rights Council on the progress of the inquiry. In February, he admitted that half the police operations reviewed by his agency “failed to follow standard protocols pertaining to coordination with other agencies and the processing of the crime scene.”

The latest report comes just weeks after the International Criminal Court (ICC) approved a formal investigation into the allegations of crimes committed in the Philippines between 2011 and 2019 as part of Duterte’s war on drugs. The court cited particular concerns about extrajudicial killings in the country between July 2017 and March 2019.

The decision drew the ire of the president, who said his government would not cooperate with the international investigators and vowed to “bar” any ICC member from entering the country to amass information. He said the ICC has had no jurisdiction over the Philippines since the nation withdrew from the international body in 2019. The ICC maintains it still has the jurisdiction to investigate crimes allegedly committed when the Philippines was a party to its Rome Statute.

Duterte launched what he termed the war on drugs soon after his election in 2016. He vowed to rid the nation of illegal drugs by ordering the police to kill any drug addicts or dealers apprehended if they felt they posed a danger to officers were.

Since 2016, at least 6,181 individuals have been killed by law-enforcement agents during more than 200,000 anti-drugs operations, according to data released by the Philippines government. However, the ICC believes the real death toll linked to police actions during the war on drugs could be higher and amount to between 12,000 and 30,000.