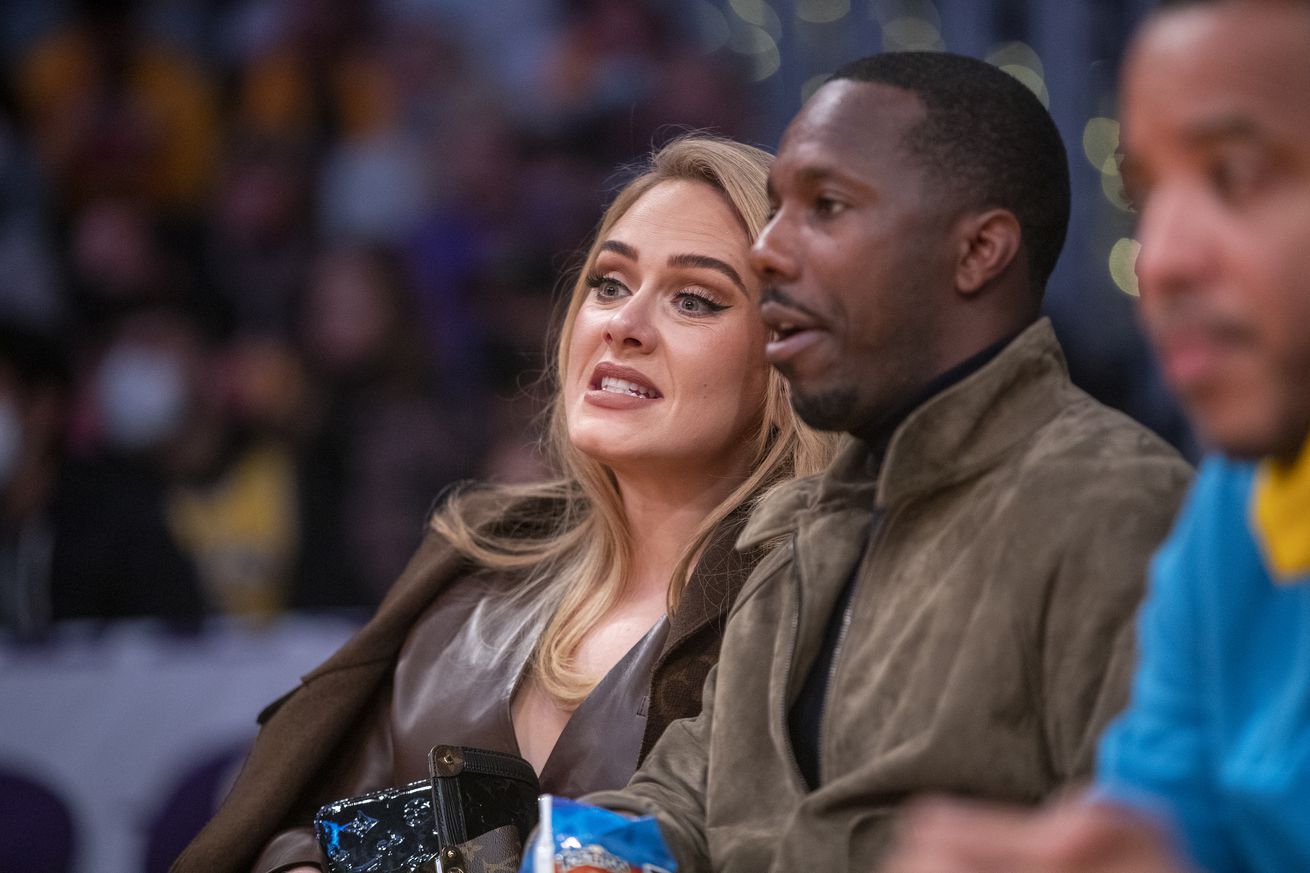 How a throwback jersey seller became one of sports’ biggest power brokers.

The world outside of sports is suddenly obsessed with agent Rich Paul after the Klutch Sports CEO went public with his relationship with singer Adele. It’s one of the more unlikely celebrity power couples we’ve ever seen.

Almost everyone now knows Paul’s name, but few really understand what he does, or how he’s become one of the most influential men in the world of professional sports. Today we dive into the rise of Rich Paul from a kid grinding, selling throwback jerseys in Cleveland, to becoming an international powerhouse.

Rich Paul grew out of humble beginnings. Growing up on Cleveland’s east side, there was no silver spoon or privilege that would lend itself to starting one of the biggest agencies in sports. Paul lived above his father’s shop, a candy store that was a staple of the community.

Valuing education, Rich Paul Sr. sent his son to Benedictine High School, a private Catholic prep school in the center of Cleveland. Tragically, Paul Sr. would never see the fruit of his labor — passing away from cancer in 1999. Many kids would have spiraled out of control at the loss of a parent in their senior year, but the 18-year-old managed to keep control and graduated.

Knowing the traditional path through college wasn’t for him, Paul began getting involved in the buying and selling of throwback jerseys. At the time throwbacks weren’t mass marketed, and despite being wildly popular hadn’t become mainstream enough to warrant huge productions runs. Paul would routinely travel to Atlanta and back, collecting as many throwbacks as he could, driving back to Cleveland and selling them out of his car.

Paul innately knew what people wanted. His eye for which jerseys, and which players to stock was legendary. That’s precisely what happened when a fate encounter at the Akron-Canton airport would change everything.

Thank you Warren Moon, for changing my life

Still a year removed from the NBA in 2002, LeBron James was nonetheless the hottest young athlete in the world. Dozens of magazine covers, proclamations that the next great one was arriving — prophecy of the “next Michael Jordan” coming out of Akron was a worldwide story.

LeBron was at the Akron-Canton airport on a Spring morning, preparing to board a flight to Atlanta to see the NCAA Final Four. Wearing a Michael Vick jersey hand-picked for the trip, LeBron was distracted by a skinny young man whose jersey game far exceeded his own. It was a pristine, authentic, powder blue Warren Moon Oilers jersey, and it was too much to let pass. LeBron James approached the man, dying to know where he got such an incredible throwback, and Rich Paul, who just so happened to wear the jersey that day, was eager to tell James about his throwback business.

Needing to get his hands on his product, LeBron gave his contact information to Paul, and soon he was buying his jerseys exclusively from the man he met in the airport. Their relationship started with a Magic Johnson Lakers jersey, and a Joe Namath Rams — but quickly blossomed into so much more, and the duo became fast friends.

Elite athletes have a huge array of people they rely on, but a very small number who get to be inducted into their inner circle. The most trusted, loyal advisors who players lean on in a world where so many are ready to be fake.

For LeBron James he relied on his childhood friends, Maverick Carter and Randy Mims more than anyone — but this was soon opened to Rich Paul as well, who had transcended simply selling jerseys to the future star, becoming a trusted confidant.

The trio were LeBron’s main support system, each filling a specialized role. Carter served as LeBron’s business manager, shaping and cultivating his personal brand. Mims was a liaison between LeBron and the Cavaliers, communicating important information between the parties. Rich Paul was tasked with working under legendary agent Leon Rose at Creative Artists Agency (CAA), to better understand how sports agencies work.

It was a brilliant system that sured up every aspect of LeBron’s career, and ensured the budding superstar had people he trusted at every point of his journey.

With years of learning the ropes at CAA, and seeing Rose negotiate LeBron’s extension with the Cavaliers in 2006 — LeBron’s inner circle believed they were ready to start their own agency. In 2012 Paul and James foundered “Klutch Sports,” leaving CAA and making preparations for James’ contract with the Miami Heat to expire in the Summer of 2014.

Hiring smart people around them, like contract guru Mark Termini, Klutch quickly became the hottest new agency for NBA players. The combination of LeBron’s star power and Paul’s natural gift for salesmanship, the agency was a force in basketball.

From 2014-19 Klutch, under Paul’s leadership, had negotiated $1.4B in NBA contracts, expanding its client roster to 25 players — including Anthony Davis, Ben Simmons, and Trae Young, to name a few.

The popularity of the agency terrified the establishment.

During NCAA meetings in 2019 a curious new rule was adopted. It mandated that any agent trying to represent players had to hold a bachelor’s degree. This, clear shot at Rich Paul who didn’t attend college, was referred to as “The Rich Paul Rule” in many circles.

The NCAA’s rationale was that the degree somehow protected players, though that rang hollow. In the case of Klutch Sports it wasn’t a monolith with Paul at the top calling the shots, but rather a network of trained agents handling the business. Paul was certainly the figurehead, but his experience both dealing with LeBron James, and working with CAA certainly gave him claim over being a good agent.

Instead, the decision seemed far more rooted in the realization that no agency could keep up with Klutch. Paul and Co. boasted phenomenal contracts for athletes, AND the star power of LeBron James behind the organization. That makes it exceedingly difficult to keep up if you’re an establishment agency with the same pedigree.

The NCAA decision led to Paul writing an op-ed for The Athletic, in which he lambasted the rule saying it was designed to keep out minorities, and people from less privileged backgrounds from becoming sports agents. The NCAA would back down following the release of the op-ed, cementing Paul as one of the biggest players in the sports landscape.

Hello from the other side

It’s here we have another element of fate entering Rich Paul’s life, but this time not because of business, but love. It was 19 years ago a young Paul caught the eye of LeBron James when he wore a Warren Moon jersey in an airport, this time it was an older, wiser Paul getting the attention of one of the biggest music stars on the planet on a dance floor.

Adele and Rich Paul met a few years back at a birthday party, where the pair first talked on a dance floor — but it wasn’t love at first sight. The pair were cordial, and became friends, but as Adele told Oprah on her TV special, it was wasn’t until the pair met for a business lunch that sparks flew.

The two were drawn to each other. Adele has called Paul “hilarious,” “so funny” and “very, very smart,” also admiring his work ethic towards his clients. For his part Paul has been relatively quiet about the relationship, but he’s generally a man who favors privacy.

Still, the move has catapulted Rich Paul out of the sphere of sports, and into worldwide recognition because of his relationship with Adele. The pair have been spotted at Lakers games, and around Hollywood — really making it the first time Paul has faced the paparazzi, without LeBron being at his side.

What’s next for Rich Paul?

Klutch Sports continues to grow and become a force in the world of sports representation. The mix of Paul’s business savvy, with LeBron’s star power has become an unstoppable combo.

Recently Paul accepted a position with United Talent Agency (UTA) to have Klutch Sports manage its sports division. UTA, primarily focused on film and television, represents a new venture for Paul to continue to solidify himself as a premiere agent, and with LeBron already taking a foray into film with Space Jam: A New Legacy, the future of Klutch is bright.

It’s been a hell of a ride for a dude who began selling jerseys out of his car, but the sky is the limit for one of the most influential men in sports.