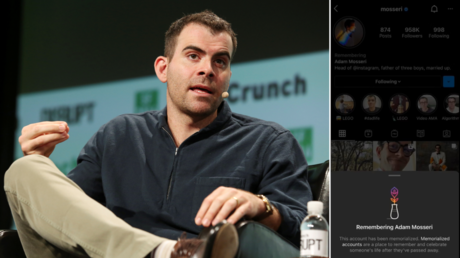 Instagram locked the head of the platform out of his own account, after a scammer sent a fake obituary claiming Adam Mosseri had passed away.

The scammer, who goes by the name Syenrai, exploited the platform’s memorialization feature, which allows users to report the death of any account holder provided they can back it up with a death certificate, an obituary, or a news article featuring the full name of the deceased. Instagram will thereafter prevent anyone logging into a memorialized account and making changes to photos, and will slap the word ‘Remembering’ next to the profile’s name.

Instagram confirmed this week that Mosseri had been locked out of his account in September, but said it had quickly restored his access to the platform. However, Syenrai told Vice’s Motherboard magazine that other users who have had their accounts memorialized in the same fashion have had to wait for days or even weeks to regain access. They said they had targeted Mosseri’s account to highlight his company’s lax verification protocols, adding that they found it “ridiculous” that Instagram “lets such things even happen on their platform in the first place.”

The scammer shared with Motherboard their e-mail exchange with Instagram’s tech support team, in which they appear to have all too easily passed off a fake obituary in the name of Adam Mosseri on his gullible staff.

As it turns out, Instagram’s memorialization feature appears to be a veritable money-making machine for the likes of Syenrai and others – for a fee, they offer a ‘banning service’ to any Instagram user wishing to kick another off the platform. And they say it really doesn’t take a lot to convince Instagram someone has passed away. In 98% of all cases, just about any obituary dated the same week as a memorialization request suffices to trigger the blocking of the account, Syenrai claims. The obituary does not even have to bear the same name as that featured in the targeted account.

Commenting on the memorialization of their boss, an Instagram spokesperson told Motherboard the company “hires investigators and cybersecurity specialists to detect scammers’ tactics.” The statement reassured users that the staff reviewing memorialization requests cross-check the name and date of birth featured in the account with the details in the submitted obituary.

Meanwhile, another anonymous user who claims to provide a pay-for-ban service told Vice back in August the activity had become “pretty much a full-time job” for them, and claimed they had raked in a five-figure income in under a month.