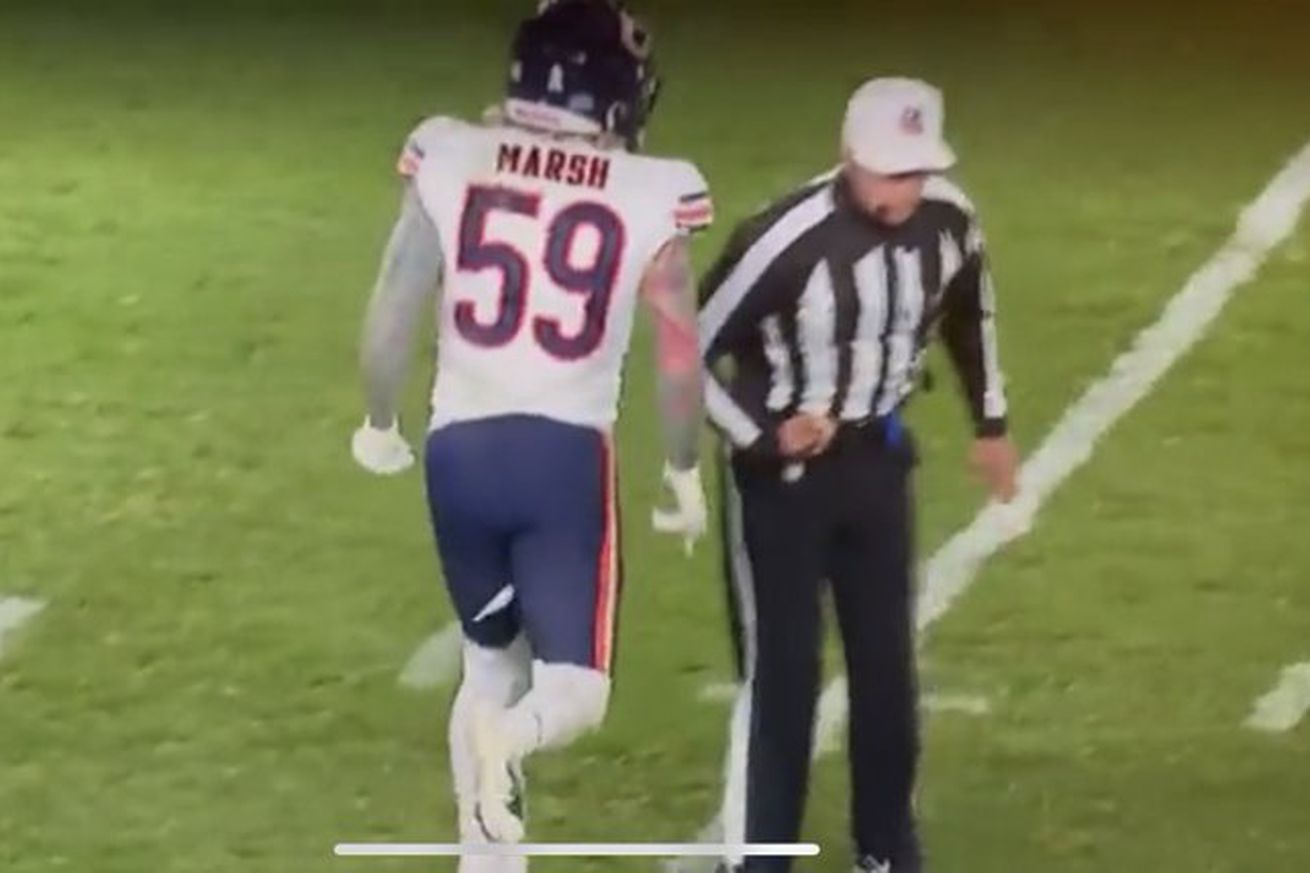 Nobody asked for this and now it’s ruined an amazing comeback.

The NFL’s point of emphasis on taunting took a turn on Monday Night Football with an incident that perfectly encapsulated how ludicrous the rule is. In the middle of a Bears comeback against the Steelers, linebacker Cassius Marsh was penalized for taunting on a key third down sack of Ben Roethlisberger late in the fourth quarter that positioned Chicago to get the ball back for a potential game-winning drive.

Now there are huge questions about the nature of the penalty, and the intent by referee Tony Corrente. Marsh recorded the sack with 3:40 left in the game with the Steelers up by three. Upon standing up he celebrated with a flying spin kick, as he’s done for much of his career, and began running to the sideline. At this point Corrente appears to lean his hips into Marsh’s path, then flagged the linebacker for taunting.

Tony Corrente leaned into the contact and then held his flag toss like a walk off three pointer. What a joke pic.twitter.com/MhNlNVewJx

The result of the play was a first down for Pittsburgh, who subsequently scored a field goal. Justin Fields then led the Bears on a go-ahead touchdown drive, but the Steelers answered with another field goal to win by two. Had the Steelers punted and those three points were taken off the board there’s a very real possibility Chicago wins the game. The taunting call came at a pivotal moment, and undoubtably changed the game.

Perhaps the most bizarre part though is that the penalty didn’t come for the season you might expect. In the post-game press pool Corrente’s said he did not throw the flag for the spin kick celebration.

“I saw the player, after he made a big play, run towards the bench area of the Pittsburgh Steelers and posture in such a way that I felt he was taunting them.”

It’s very difficult to see how the could be construed as taunting at all. Every video angle simply looks like a player trying to jog off the field, and not really paying much attention to anything else. However, the referee felt that something inside of this moment was serious enough to throw a flag and alter the outcome of the game.

Marsh is resolute that he did nothing wrong. In his post-game comments he discussed the moment, pointing out that if a player made contact with an official they’d be ejected or suspended, but in his eyes the referee made contact with him and nothing happened.

There is no question, at least in my mind, that this was an absolutely atrocious call. However, the real issue isn’t necessarily that Corrente felt the need to throw the flag, it’s that the NFL has created a scenario where this can happen in the first place. I was highly critical of the league making taunting a point of emphasis back in August because of how wishy-washy deciding what constitutes “taunting” is.

“The NFL is introducing YET ANOTHER subjective, referee-decided penalty in a league where Subjective penalties hurt the game.”

In order for a sport to thrive there need to be obvious, clear-cut rules. On some plays, like pass interference, this is difficult, and does require some subjective interpretation. However, when it comes to something like taunting it’s an extremely flawed process that is far too open to bias on behalf of the official.

The league’s definition of taunting is: “baiting or taunting acts or words that may engender ill will between teams.”

With that under consideration, and based on the video we have, deciding that taunting is running in the direction of the opposing sideline feels, at best, extremely premature. Had Marsh gotten in the faces of his opponents, or barked some words at them, then sure — hit him with the taunting. However, based on where Marsh and Corrente were when the flag was thrown Marsh hadn’t even crossed the hash marks yet, putting him 53.4 feet away from the Steelers bench when the flag was thrown.

Corrente felt that the act of even approach the Pittsburgh sideline constituted taunting, and it could have cost the Bears one of their most important games of the season.

Ultimately this played out like we all feared it would: An otherwise amazing ending to a national game, ruined by a stupid point of emphasis that never should have existed in the first place. The NFL has not commented on the incident, but we sure well: That was bullshit.