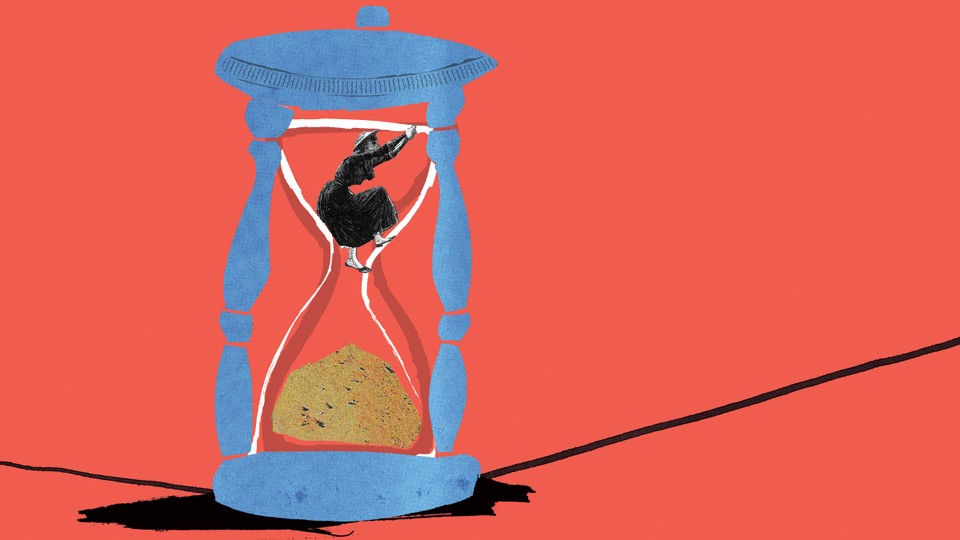 I turn 60 today, and I feel vaguely embarrassed about it, like I’ve somehow let myself go, like I’ve been bingeing on decades and wound up in this unappealing condition.

Chances are, most of you haven’t crossed this border station yet, so you’d better listen up. Because if you play your cards right, it’s going to happen to you too.

Here’s what it feels like to turn 60: weird. On the one hand, you’re still going to the gym and to dinner parties. Sixty-year-olds still perform surgery on people who could choose other doctors. There’s no dithering yet—the senescence is almost undetectable.

But on the other hand, you have been on this Earth for a really, really long time. I have a photograph of myself at age 3, standing on the docks of Cork Harbor, about to sail to New York. When I look at the picture of that small child on her sturdy legs in the foggy past, I don’t feel any connection to her. The photograph looks like something I would discover after many days on Ancestry.com. It looks like a snapshot of my own great-aunt.

Courtesy of the author

When I stood on that dock, “man” hadn’t walked on the moon; Malcolm X, Martin Luther King Jr., and Bobby Kennedy were all alive; the Beatles were still playing the Cavern Club. World War II had ended less than 20 years earlier; none of the men who flew planes into the World Trade Center had been born. How can all of the things that happened since that photograph was taken have occurred in one lifetime? How can people walk around holding this much of the past inside them? How do they possibly add in another two or even three decades of experience? I’m topped up! I’m going to have to start erasing the larger files. Maybe I already have and don’t know it.

[Caitlin Flanagan: I’ll tell you the secret of cancer]

Don’t get me wrong: I’m feeling pretty upbeat about becoming what David Sedaris calls “officially old, the young part of old, but old, nevertheless.” Not in some sort of “active senior” way. (Gross!) I feel good about making it to 60 because almost 20 years ago, I was diagnosed with a vicious cancer, and there wasn’t an oncologist in the country who would have given me Vegas odds on five years.

The thing about cancer is that there’s a wild card in every deck. And I got one: At the exact time that I was diagnosed, there were huge breakthroughs in my exact kind of breast cancer. In a sense there isn’t any such thing as cancer at all, because the disease is made up of so many unique pathologies, many of which respond to different agents. I thought these discoveries were going to be too late to help me, but they started arriving in waves, and they keep coming. Even though I currently have Stage IV cancer and will be on chemotherapy for the rest of my life, here I am. I’ve gotten to see my children grow up, and I never thought that would happen.

The last year of any decade is a tough one—the odometer’s about to tick over, and you can’t stop it—but how could I complain? I envisioned turning 60 as a series of consumer decisions: Go on a Viking cruise; buy a few postsexual separates from Eileen Fisher; get one of those oxygen facials. But then it got real. One day a few weeks ago, I got old. It just suddenly happened, and there isn’t a sports car in the world I can buy to make it otherwise.

One thing that doctors don’t tell you about cancer is that even if you get lucky, there’s a price: The treatments add up in your body. I don’t look sick. But things have gone wrong inside me that have nothing to do with the cancer itself. The obvious symptom is that I’m tired. “Everyone’s tired!” other people my age tell me. But I’m as tired as they are, plus decades of chemotherapy and radiation that damaged my lungs. Every time someone asks me how I’m doing, it’s like grand rounds. I’m fine, I say; fine! The big problem, when I’m out and about, is that sometimes I just really, really want to sit down. Sometimes I’d rather sit down than do anything else in the world.

Airports are some of the worst places if you’re a person who needs to sit down. There are all those soulless corridors, and—a design flaw, it seems to me—the gates never seem to have as many seats as the planes. Last month I flew to see my older sister. When I finally got to my gate, it looked like I was in luck—plenty of empty seats! But when I got closer, I realized that every other chair was covered with tape, in one of those meaningless displays of pandemic safety that California is committed to. I was about to spend five hours locked in a plane with these people; was 15 minutes at the gate really going to make a difference?

Anyway, I felt a tingle of panic. In my youth I spent a lot of time sitting on the floors of airports, waiting for dirt-cheap flights that were always delayed by many hours. An 18-year-old girl sitting on the floor looks like she’s on an adventure. A 60-year-old woman looks like she’s in need of assistance. I walked to the next gate, but there were no chairs there either, or at the next one.

Finally I saw a mirage: three empty seats in a row. They were real, but (damn it) they were reserved for other people, people who need some extra help. I long ago promised myself that no matter what happened, I was never going to do any learning or growing from cancer. But there’s one lesson that you can’t be this sick for this long without learning: There is no such thing as other people. There’s just all of us, with our secret or public burdens, muddling through the best we can, many of us not doing an especially good job of it. There was a time when I could manage my cancer without having to understand myself as “disabled,” but at 60, that time has passed.

I sat down, and my bones settled so heavily around me—and the relief was so immediate—that I knew I’d done the right thing. But I also knew that through that simple, necessary gesture, I had become old.

Some people have the idea that only in modern-day, consumerist America do people fear aging. There’s always some mystical country (usually France) where older women in sophisticated clothes are trailed by dumbstruck young suitors, and everyone runs out of nightclubs when they hear some 80-year-old is across the street, dispensing tribal wisdom. But that’s not true. People everywhere have mourned getting old. Turn to the poets. They will tell you.

What shall I do with this absurdity —

Decrepit age that has been tied to me

Yeats, of course. He must have spent his whole life waiting to get old, because when the time came, he had the goods. Your body does become a caricature of its former self. But here are the next lines of that famous poem:

Never had I more

Imagination, nor an ear and eye

That more expected the impossible.

I’ve thought about sitting in that chair a lot since it happened, and I’ve actually begun to feel a bit emotional and proud. Just by staying alive, I’ve witnessed a lot of life and a lot of history. I’ve done so many things in these six decades—I’ve survived some serious shit. In many of the ways that don’t involve the mortal coil, I’m stainless steel.

And on the inside, I’m still me—probably more myself than ever. In this light, that old snapshot looks different. There’s my big sister standing next to me, casting a worried, watchful eye over me as she has for 60 years; there’s a little bit of my mother—my mother! It’s been so long since I’ve heard her voice—and there’s my father, present in his absence, recording the moment with his camera. This was many years ago, of course. When my parents were still young, and when man hadn’t walked on the moon. This was when we were the only people in the world who completely understood one another.

The four of us: the Flanagans. I know that girl. I am that girl.