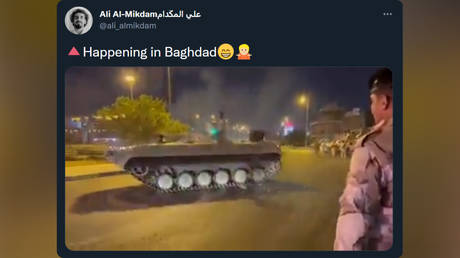 An Iraqi army serviceman has shown off his drifting skills in the streets of Baghdad using an armored personnel carrier.

A video of an APC drifting in what looks like an empty roundabout began making the rounds on social media on Monday.

The soldier’s commanders did not exactly appreciate his imaginative use of the military hardware and issued a statement promising to punish the driver. An investigation has been launched into whether he had breached his duties during a security deployment.

Iraqi army top brass hastened to reassure everyone that the APC driver was just a “bad apple” whose behavior was not representative of the “highest levels of military discipline and commitment” of the country’s military personnel, as reported by the Middle East in 24 outlet.

According to other regional media, the soldier was part of the security reinforcement deployed in the Iraqi capital following an assassination attempt on the country’s prime minister on Sunday, which saw an explosives-laden drone ram into Mustafa al-Kadhimi’s residence. Security personnel also managed to shoot down two more drones attempting to strike the building. The country’s premier survived the attack unscathed, though several of his bodyguards sustained injuries.