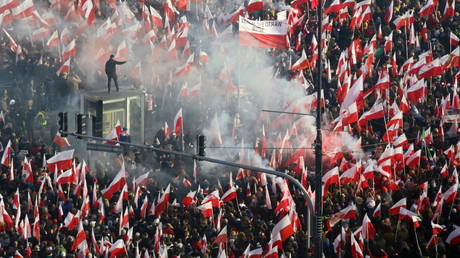 Thousands of people took part in the Independence Day march in Warsaw, after Poland’s nationalist government found a loophole that allowed the event, even though a court earlier declared it illegal due to Covid-19 restrictions.

The Office for War Veterans, which became the organizer of this year’s event, said that it was staged to honor the “protectors of the border” and underline the need to defend Poland’s sovereignty from intruders.

They were apparently referring to the border guards, police and military, who’ve been preventing attempts by some 4,000 would-be asylum seekers from the Middle East to cross into Poland from Belarus since the start of the week.

The Polish authorities have described the ongoing humanitarian crisis as a “hybrid attack” by Belarusian President Alexander Lukashenko against Poland and the EU.

As migrant bodies pile up, the UK & France have no right to lecture Poland & Belarus

They claim that he has deliberately been bringing the asylum seekers into Belarus, sending them to border in retaliation for sanctions imposed on Minsk by Brussels over alleged human rights violations earlier this year.

Lukashenko says that sanctions are the root cause of the crisis, claiming that the nation cannot cope with the influx of refugees since western trade and investments have dried up.

Warsaw’s mayor Rafal Trzaskowski had challenged the registration of the Independence Day march in court, insisting that it shouldn’t be allowed due to the difficult epidemiological situation and the fact that in 2020 it was staged in violation of the ban on public gatherings.

Both the original and the appeals court sided with Trzaskowski, but it still wasn’t enough to prevent the gathering. Critics have called it a right-wing march and accused the participants of violence as well as anti-migrant and homophobic slurs in the past.

On Tuesday, Poland’s ruling Law and Justice (PiS) party offered the Office for War Veterans as the organizer of the march, giving it a status of a state ceremony – outside of the jurisdiction of the city authorities.

The move angered the opposition, but the Left coalition quickly argued that it amounted to an official admission by the PiS government of long-suspected ties with nationalist groups.

“PiS has… taken responsibility for whatever happens during the march, every fight, every instance of arson,” the Left (Lewica) insisted on Twitter.

The ruling party’s spokesman declined to comment on whether it endorsed the controversial event and redirected all questions to the Office of War Veterans.

The PiS government is currently sparring with the EU over the decision by Poland’s Constitutional Tribunal in October to prioritize national laws over those of the European Court of Justice (ECJ). Brussels is withholding a €36-billion grant for post-pandemic rebuilding form Warsaw to force it to bring its judicial system in line with the bloc’s standards.