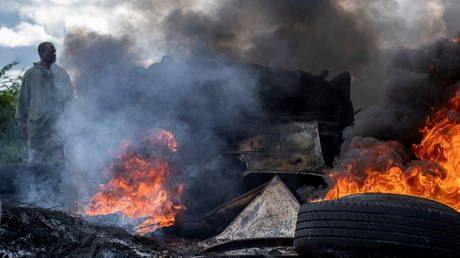 Protests against Covid restrictions on the French island of Martinique descended into looting and violence on Wednesday, with barricades being set alight overnight amid increasing tensions in the Caribbean.

Footage shared on social media showed flames blazing in parts of Martinique, as protesters rampaged around a shopping center and blocked roads during increased unrest ahead of attempts to speed up the rollout of mandatory vaccination for healthcare workers on the island.

The introduction of a vaccine mandate is thought to have unsettled many residents on the Caribbean islands, since many are descended from slaves who were exposed to toxic chemicals while being forced to work on plantations in the 20th century.

Guadeloupe, a nearby island also under French control, saw protests over the weekend, with 38 people detained on Sunday after they engaged in looting and vandalism during a demonstration against a curfew. Authorities have since extended the nightly curfew in an effort to restore calm after the violent clashes.

The situation comes days after French President Emmanuel Macron warned that the situation in the Caribbean is now “explosive.” There are also concerns that some protesters were carrying guns and reports of gunshots fired at police amid the chaos.

The Covid measures, dictated by the French government in Paris, were met with a general strike in the region by trade unions and staunch opposition. Macron’s government was forced to engage in crisis talks with representatives from the Caribbean island earlier this week in a bid to quell the rising discontent.