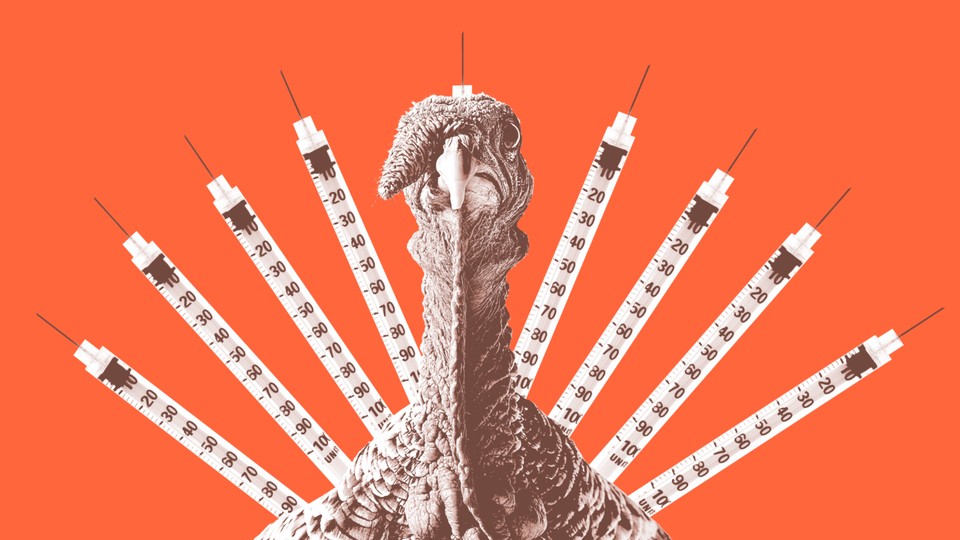 For many, many months now, 7-year-old Alain Bell has been keeping a very ambitious list of the things he wants to do after he gets his COVID-19 shot: travel (to Disneyworld or Australia, ideally); play more competitive basketball; go to “any restaurants that have french fries, which are my favorite food,” he told me over the phone.

These are very good kid goals, and they are, at last, in sight. On Tuesday evening, about as early as anyone in the general public could, Alain nabbed his first dose of Pfizer’s newly-cleared pediatric COVID-19 vaccine. The needle delivered “a little poke,” he said, but also a huge injection of excitement and relief. Since his father, a critical-care physician, was vaccinated last December (the first time I interviewed Alain), “I’ve been impatient,” Alain said. “I really wanted to get mine.” Now he is finally on his way to joining the adults. When he heard on Tuesday that his shot was imminent, he let out a scream of joy, at “a pitch I have never heard him use before,” his mother, Kristen, told me.

There’s an air of cheer among the grown-ups as well. “It’s cause for celebration,” says Angie Kell, who lives in Utah with her spouse and their soon-to-be-vaccinated 6-year-old son, Beck. Their family, like many others, has been reining in their behavior for months to accommodate their still-vulnerable kid, unable to enjoy the full docket of post-inoculation liberties that so many have. Once Beck is vaccinated, though, they can leave mixed-immunity limbo: “We might have an opportunity to live our lives,” Kell told me.

The past year has been trying for young children, a massive test of patience—not always a kid’s strongest skill. And there’s yet another immediate hurdle to clear: the plodding accumulation of immunological defense. Alain has another 15 days to go until his second dose; after that, it’ll be two more weeks before he reaches a truly excellent level of protection. Only then, on December 7, will he count as fully vaccinated by CDC standards and be able to start adopting the behavioral changes the agency has green-lit. In the intervening weeks, he and the many other 5-to-11-year-olds in his position will remain in a holding pattern. Their wait isn’t over yet.

The timing of this semi-immune stretch might feel particularly frustrating, especially with the winter holidays approaching: At this point, no young kids are slated to be fully vaccinated by Thanksgiving or Hanukkah, except the ones who were enrolled in clinical trials. One shot can offer a level of protection, but experts advise waiting to change behavior for a reason—the extra safeguards that set in about two weeks after the second shot really are that much better, and absolutely worth sitting tight for.

“It takes time for immune cells to get into a position where they’re ready to pounce,” Gigi Gronvall, a senior scholar at the Johns Hopkins Center for Health Security, told me. COVID-19 vaccines teach immune cells to thwart the coronavirus, a process that, like most good boot camps, takes many days to unfold. The second shot is essential to clinch the lesson in the body’s memory, encouraging cells to take the threat more seriously for longer. Immune cells also improve upon themselves over time—the more, the better in these early stages. Gronvall’s own 11-year-old son is also about to get his first shot, and she doesn’t want to risk stumbling so close to the finish line. “I can’t know exactly what his immune system is going to do” after the first dose alone, she said.

[Read: You’re not fully vaccinated the day of your last dose]

Evidence from Pfizer’s original clinical trial, conducted only in adults, hinted that a first, decent defensive bump takes hold after the first shot. Kit Longley, Pfizer’s senior manager of science media relations, pointed to those data when I asked how kids at various points along the vaccination timeline should be approaching behavioral change. “Protection in the vaccinated cohort begins to separate from the placebo arm as early as 12 to 14 days after the first dose,” he told me.

The adult clinical-trial data were collected last year, though, long before the rise of the Delta variant. A more recent study, conducted in the United Kingdom, showed that one dose of Pfizer reduced the risk of symptomatic COVID-19 by only 35.6 percent when the cause was Delta, and by only 47.5 percent with Alpha. (And remember those numbers apply best on a population scale—not for a single, individual child.) After adding a second dose, though, effectiveness rocketed up to about 90 or 95 percent against either variant. “You really need two doses for adequate, good protection,” Samuel Dominguez, a pediatric-infectious-disease specialist at Children’s Hospital Colorado, told me.

Immunity is so far looking strong in young kids: In a recent trial of thousands of children ages 5 to 11, Pfizer’s vaccine was more than 90 percent effective at blocking symptomatic cases of COVID-19, including ones caused by Delta. Longley said Pfizer expects that the timing of protection will be similar between children and adults—a first dose should lower everyone’s risk to some degree. But the company’s pediatric trial picked up only a few COVID-19 cases; none of them occurred until about three weeks after the first dose was given, or later. So it’s hard to say anything definitive about when “enough” immunity really kicks in for kids.

Some parents are counting on a level of early protection from one shot, including my cousin Joanne Sy, whose 8-year-old son, Jonah, received his first injection on Friday. “He will have good immunity after one dose,” she told me, hopefully enough to guard him on a trip they’re taking to New York for Thanksgiving two weeks from now. “We’re still going to be cautious,” Sy told me: They’ll be watching the Macy’s Thanksgiving Day Parade from a hotel room rather than the streets, and wearing masks, at least on the plane. “But we just need to move forward.”

The calculus is playing out differently for Christy Robinson of Arlington, Virginia, who will again be “hunkering down” with her husband and two daughters, June and Iris, 7 and 5, respectively, this Thanksgiving. The kids got their first Pfizer shot on Saturday, setting their household up for full, full vaccination by mid-December, just in time to hold an indoor gathering with their aunts, uncles, and cousins for Christmas. (Some quick arithmetic: To be fully vaccinated by December 25, a kid would need their first dose by November 20.) June’s also eager to “see my friends inside, because it’s cold outside,” she told me—plus go to movie theaters, and Build-A-Bear, and a trampoline park, and IHOP, and the nail salon.

By the end of this conversation, Robinson looked amused and maybe a little regretful that my question had prompted such an extravagant list. As their mother, she’s especially excited for the possibility of no longer having to quarantine her daughters after viral exposures at school. Heftier decisions are ahead too. She and her husband are still weighing whether to bring their daughters into closer, more frequent indoor contact with their grandparents, who are vaccinated but could still get seriously sick if someone ferries the virus into their midst.

And that risk—of transmitting the virus—is worth keeping in mind, with so much SARS-CoV-2 “still circulating around,” cautions Tina Tan, a pediatrician and infectious-disease specialist at Northwestern University. Immunized people are at much lower risk of picking up the virus and passing it on. There still aren’t enough of them, though, to reliably tamp down spread; uptake of shots among young kids, too, is expected to be sluggish in the months to come. Even fully vaccinated families won’t be totally in the clear while our collective defenses remain weak.

That doesn’t mean Thanksgiving has to be a bust—or even a repeat of 2020, before the vaccines rolled out. The Bells will be cautiously gathering with a few loved ones; all the adults in attendance will be immunized and everyone will get tested beforehand. “Then they can come inside the house, mask off,” Taison Bell, Alain’s father, told me. None of those measures is completely reliable on its own; together, though, they’ll hopefully keep the virus out.

The road ahead might feel a little bumpy for Alain, who’s celebrating his 8th birthday at the end of November, a few days after his second shot. (He’s getting the gift of immunity this year, his father joked.) The Bells will do something special “around when he hits full vaccination,” Kristen said, “with something Alain hasn’t gotten to do in the last two years.” But Alain, who has asthma, which can make COVID-19 worse, knows that his own injections won’t wipe the slate clean for him, or those around him. Some people in his neighborhood have caught the virus even after getting vaccinated, and he understands that he could too.

Alain will keep masking, and treading carefully at school, and even a bit at home. His 3-year-old sister, Ruby, hasn’t yet been able to get a shot. (I asked her how she felt about Alain’s vaccine; she responded, almost imperceptibly, “Jealous.”) Until another regulatory green light comes, she will still be waiting, which means that her family will be too.